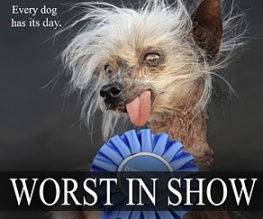 Obviously everyone has heard of dog shows, but maybe not everyone has heard of the one that is held in Petaluma, California every year. Forget your glossy coats and your plumey tails, this dog show chooses its winner based on how bald, lumpy and downright ugly it is. On one level Worst In Show is an exploration into our modern obsession with competition and social status, but on a more basic level it’s about taking a funny, slightly whimsical look at the lives of some interesting (/crazy) people who love their pets.

At the start of the film, the reigning champion of the World’s Ugliest Dog contest is Pabst, a boxer mix with a rather prominent overbite. His owner Miles is a normal, unassuming kind of guy who rescued Pabst from a shelter and who jovially says that this year he is hoping to stretch his 15 minutes of fame to a round 30. His polar opposite in the world of ugly dog contests is Dane, who has been competing for years and whose current canine competitor is Rascal, a trembling Chinese Crested with a permanently protruding tongue who has had the dubious honour of meeting celebrities such as Donald Trump, Ashley Judd and Alan Alda.

Dane is the sort of person who could quite easily crop up in the cast of Christopher Guest’s mockumentary Best In Show and you wouldn’t bat an eyelid. He is a flamboyant, rather deluded obsessive, campaigning constantly for Rascal to win the much-coveted title of World’s Ugliest Dog. Along the way, he has made himself some enemies, including Pabst’s owner Miles who now no longer responds to Dane’s phonecalls. It’s hilarious and almost hard to believe how much this man cares about winning such an inherently silly competition. But then its also surprising to discover that someone has gone to the effort of designing a computer programme which can hack the contest’s voting system. Yes, somebody actually did that (our money’s on Dane). Admittedly Worst In Show doesn’t exactly succeed as a piece of searing social commentary. It touches upon the potentially immoral implications of a contest such as this, and voices a concern that some people might be inclined to purposefully uglify (i.e. disfigure) their dogs so that they can take part. The film also vaguely attempts to discuss the concept of beauty in the modern world, but not in a terribly convincing way. At one point they have a man sitting between a photo of some Andrex puppies and a photo of one notoriously hideous competitor, Sam, and pointing out why the puppies are cuter – “they have puppy dog eyes”. Thanks for that scoop, random man! But at the end of the day, this documentary is an interesting watch because it is a character study which illustrates how strange and wonderful (and occasionally gross – seriously you should see some of these dogs) the world can be. It’s a film made with love that tenderly examines the importance of the relationship between some people and their pets. One competitor Kathleen describes how she rescued her dog Princess Abby – a rather unfortunate Chihuahua – soon after the unexpected suicide of her long term partner. Kathleen, hugging the pink T-shirt clad, goggle-eyed Abby in her arms, gazes down at her fondly and says “She rescued me”. It’s hard to watch that without getting a tear in your eye. Even if you happen to be a one-eyed pug.