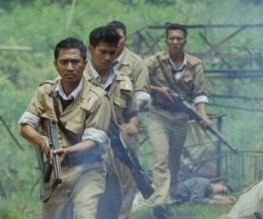 Red and White is the directorial debut of Yadi Sugandi, and deals with the Dutch invasion of Indonesia in 1947. It is the first in a proposed trilogy, and addresses an important piece of national history which may not be well known outside the shores of the country it was produced in. After years of colonial oppression, the Indonesian people faced a tough and bloody struggle for independence from their Dutch aggressors, with the Republican Army recruiting many young men from across the country to aid the war effort.

The set up is a familiar one, with a group of cadets coming together through basic training and into the war, overcoming along the way not only their enemies, but their various class, religious and racial prejudices as well. The director has clearly seen Full Metal Jacket fairly often, as this film takes a near identical structure – two acts, dealing with the training regime followed by the young cadet’s introduction into the theatre of war.

The characters themselves are a fairly one dimensional bunch – the school teacher, the farmer’s son bent on revenge, the two university graduates and the obligatory quiet and polite cadet who turns out to be a deadly expert with blades. Almost like Jason Statham in The Expendables, but with a “yours sincerely” attached to every throwing knife.

The film features two main battle sequences, the final scene – where our heroes finally come together to overcome the advancing Dutch menace in a well-executed ambush – being the most accomplished of the two. This features some impressive CRASH BANG WALLOP moments, including a few exploding fuel trucks, which always go down well. The first encounter, however, shows some of the films most glaring weaknesses. The firefight takes place in a forest at night, with the cast getting routinely splattered with mud and debris. Strangely enough, their uniforms and faces are absolutely spotless the following morning. This is either a glaring continuity error, or a subtle endorsement for woodland-based 24 hour dry cleaners. The second limitation hampering this scene is the director’s confusing decision to shoot almost the entire film in close-up. There are moments when a wider angle would be perfect to get across the scale of the threat the characters face, and in the climactic sequence the frame does expand a little to great effect.

A number of other missteps include a death scene reminiscent of the fantastic sequence in The Mask (“It’s getting dark….”), becoming so cheesy that you can smell the cheddar emanating from the screen. The other major misjudgement here is the overblown and dramatic score, which presents itself at every opportunity. It quickly becomes distracting to have the swelling and intrusive music underpinning simple dialogue scenes.

That said, the narrative is fairly well paced, and audiences will not become bored. It is even possible to become quite attached to one or two of the cadets as they fight for their cause. The special effects in combat sequences are notable, coming as they do from crew members who have previously worked on a number of Hollywood projects. Red and White, though, has clearly suffered in translation, and perhaps Indonesian audiences will find more enjoyment to be had in this depiction of a piece of their history. References to class and religious divides in that country will largely be lost on an international audience, and this has resulted in the film being restricted to a rather limited release. Nevertheless, the director can be applauded for for the ambitious attempt to follow in the footsteps of benchmark war films such as Full Metal Jacket and Saving Private Ryan, and for confronting such a bloody period with the passion it deserves.

Previous: Harry Potter and the Film Event of the Generation
Next: More UK Film Events This November

Position Among the Stars

WIN: THE WARRIOR AND THE WOLF on DVD x 3