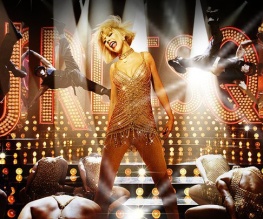 I don’t want you to forget any of the decisions that you’ve already made about Burlesque, because chances are they’re all spot on. It is indeed recycled from a clutch of other dance/club films. The script is dire and badly delivered, although that doesn’t really matter because one could, should one wish to, write out the entire plot on the gusset of one of Xtina’s rather unhygienic outfits. It’s too long, the pacing is off, the casting is distinctly ropey and, as character motivation goes, ‘follow your dream because your mum’s dead’ is about as hackneyed as it gets. Everything about this film screams ‘bargain bin’. I loved it.

Sick of her dead-end job and distinct lack of friends or family, small-town girl Ali (Aguilera) has always dreamt of escaping from Iowa and making her fortune in LA. But when she finally raids the till and buys herself a one-way ticket to the bright lights, she soon discovers that circling adverts for ‘pretty female dancers’ isn’t going to get her very far. So far, so formulaic. Happily, just as we’re getting bored with Ali’s guileless pouting, she spots a mysterious club which boasts “the hottest view on Sunset Strip” – and then, with no warning, CHER HAPPENS. The Queen of Absolutely Bloody Everything plays Tess, firm-but-fair owner of the Burlesque Lounge and elder stateswoman of the land of ostrich fans and outrageous frills, and from the moment she appears the film is essentially saved.

Tess and her devoted dresser Sean (Stanley Tucci) are beset with worries – lead act Nikki (Kristen Bell) is a raging drunk, the Lounge owes money to banks across LA and smooth-talking property developer Marcus (Eric Dane) is circling overhead. I don’t know about you, but I’ve got a sneaking suspicion that Tess is going to be glad she hired that ballsy Iowan waitress – principally because she’s got a hitherto-undiscovered ability to sing like you don’t even know, but also because in about eighty minutes time the creditors will be knocking and Tess is going to need a bright idea from an unexpected quarter… See what I mean about the derivation? Burlesque is so extraordinarily plagiarised that I think I can resolve the whole plot into its various influences. Take one small-town girl (every film ever) with an undiscovered talent (Flashdance) and thrust her from her comfort zone into a world of unexpected eroticism (Coyote Ugly). Then introduce a show with financial worries (42nd Street) plus a slightly intimidating matriarch and a vampy brunette adversary (Chicago) who sings ‘Diamonds are a Girl’s Best Friend’ (Moulin Rouge). As soon as things look like they’re liable to slow down introduce two conflicting love interests (Cabaret) – ideally, one of these should be a relatively clean-cut chap who starts off as a platonic friend whilst the other is a rich playboy able to elevate Small Town Girl’s life to a level of luxury with which she is ill-equipped to deal (Showgirls, pre-rape). Add musical numbers, supporting actresses in their underwear, Alan Cumming (Cabaret again), a redemptive moment and a plot resolution which entwines two instances of clumsy foreshadowing, and you’re done.

I know that so far this has sounded rather negative, but it honestly isn’t meant to. Burlesque takes all the absurdly over-the-top aspects of every film above and forges them into a dizzying confection of tights, tantrums and tits. Every line, from “If you fall off the stage, remember – legs extended and boobs up!” to “I’ve held your hair back as you’ve puked up everything but your memories” (delivered just before Cher attacks a car with a tyre lever), is utterly ridiculous. It’s amazing. Categorically the best things about Burlesque are the infinitely talented Cher – who, lest we forget, holds an Academy Award for Best Actress – and Stanley Tucci, who continues to play gay-Stanley-Tucci with devastating aplomb and is a perfectly wry foil to Cher’s mad contralto hooting. Their on-screen partnership is reminiscent of (if rather muckier than) Tucci’s work with Meryl Streep, with reasonable dramatic undertones threading through the smut and cackling.

The rest of the cast is fairly unmemorable, although Aguilera herself is much more adequate actress than you might expect and still belts out songs like nobody else living. Interestingly, her amount of influence in the club is directly disproportionate to how much burlesque there is – the first couple of numbers are respectable sub-Dita fare, but by the time we reach the final set piece ‘Show Me How You Burlesque’ the film has become an elaborate (and dated) music video. It’s high camp, it’s low-rent, it commits literally every single sin in the Old Testament of musical cinema, and it’s absolutely irresistible. Watch it.