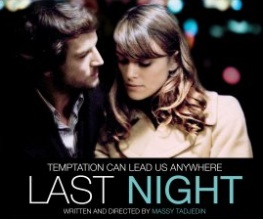 Nobody actually wants to see a dramatic romance, do they? We’ve all seen Closer, and it basically feeds you all you need to know on the soap-operatic themes of deceit and betrayal which inevitably attend anything described as ‘intense’ or ‘brutally honest’. Last Night is both intense and brutally honest, but only if you’ve been awake for ninety-one hours and have come to believe that the world consists of shadowy ciphers orbiting the handful of real people who live in SoHo and drink wine surrounded by stripped pine everything. Its spectacular contrivance is equalled only by its spirit-crushing tedium.

Michael (Worthington) and Joanna (Knightley) seem to have a pretty good thing going. He’s a high-flying businessman and she’s a freelance writer trying to follow up the success of her first novel, they share a beautiful New York home, and they’re happily married – happily, that is, until Joanna obligingly attends a work do with Michael and meets his achingly beautiful new colleague Laura (Mendes). Instantly jealous of their obvious mutual attraction and suspicious of Michael’s failure to mention Laura before, Joanna is worried that her husband’s impending business trip with her will give him the perfect chance to consummate their hypothetical affair.

Obviously, one thing which wouldn’t do Joanna’s holier-than-thou attitude any good would be the sudden reappearance of old flame Alex (Canet), with whom she had a brief and passionate affair during a break from Michael’s company. He appears right on cue and Joanna is instantly seduced by the forbidden delights of rekindling their friendship whilst Michael, who knows nothing of Alex, is away. Meanwhile, Michael and Laura are getting too close for comfort in their Philadelphia hotel – the question is, which of them will succumb to temptation and scratch their seven-year itch? There are literally four possible answers to that question! Four! That’s so many answers!

For your delectation, I have included a few pictures of Keira Knightley Doing Acting above. She’s never been particularly good at Doing Acting, but in what ought to have been a very understated film her hamminess and clunky delivery stands out like a really shit actress trying to hold her own against Guillaume Canet. Funny, that. When she isn’t simpering she’s favouring various windows around NYC with her patented Moody Stare (for best results, use with gratuitously smoky eye makeup), and in the occasional breaks between those two she smokes endless cigarettes as if she’s trying to make them come in her mouth.

In fairness, she has very little to work with. First-time writer-director Massy Tadjedin has taken a reasonably interesting premise – what sort of infidelity is more harmful to a relationship, physical or emotional? – and turned it into a plodding, lifeless saga. Each and every plot point is clumsily signposted hours in advance, forcing the audience to wait through reams of predictable dialogue and clichéd cinematography (‘meaningful’ long shots interspersed with choppy cuts? Man wasn’t meant to live at this speed!) just to have each of their predictions confirmed. Sam Worthington continues his one-man quest to make bloody Avatar the highlight of his career, whilst Eva Mendes’ one-dimensional Office Whore is genuinely less fleshed out than Knightley’s utterly superfluous bra.

Last Night‘s one, bittersweet saving grace is Guillaume Canet, whose believable and emotionally pitch-perfect Alex is a joy to watch – it’s just painful to see an intelligent performance surrounded by such dross. It’s possible that, once Tadjedin had been suitably restrained, Last Night‘s premise could have made a superb short film – unfortunately, once it was dragged out to feature length it didn’t even have the virtue of brevity to counteract its by-the-numbers direction, lumpen script and crude performances.

There’s perhaps one shot which tells you all you need to know about this film. Towards the end, we see Joanna staring out of a window (check) and smoking (check). There’s a great column of ash on the cigarette because she’s too troubled to even notice and flick it off. She turns towards the camera, and sheds a single tear. An actual single tear. If Massy Tadjedin is ever allowed to make another film, Best For Film will go on strike.