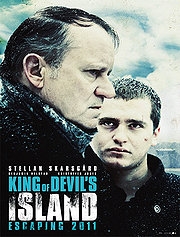 It’s the winter of 1915 and 18-year-old sailor Erling (charismatic Elvis lookalike Benjamin Helstad) who shall henceforth be known by his prison name, C19, arrives on Bastøy (a kind of early Norwegian Borstal – or a Börstal, if you will) to begin his sentence for… well we’re never quite sure why he’s there, but the rumour is he might have killed a man and anyway you can tell he’s a very bad boy because he’s just so fucking hot. After a stern induction from The Governor (gravel-voiced gloom-meister-in-chief Stellan Skarsgård) the no-fun-and-games begin in earnest as C19 is put to work variously as forester, pointless pile of rocks shifter, and all round shit shoveler. Rather inevitably he also quickly asserts his rank amongst the other inmates by punching a few of them in the face and just generally standing around being Marlon Brando all over the place. Along the way he begins to bond with fellow prisoner C1 (Trond Nilssen), the Governor’s favourite, who is only weeks away from release and under strict orders to keep the peace till then or else. As tensions at Bastøy steadily build, C1 is forced to play conformist to C19’s rebel, until the discovery of sexual abuse by the centre’s sadistic supervisor tips him over the edge, propelling him and his fellow inmates into full-scale revolt.

Punch-ups in the latrines; draconian discipline; sexual abuse; pillowcases that look like they’ve been used to strain beef stock – a movie really has to go some to overcome this kind of prison-flick cliché. Taking the bold decision to completely avoid anything approaching back-story, director Marius Holst has risen to the challenge by choosing to emphasise the here and now of it all. While this sounds great on paper (who really likes exposition after all?) in effect it leaves us with little or no idea as to why any of the characters are there in the first place – a problem when it comes to knowing where our sympathies should really lie as the inmates of Bastøy flip the tables (both figuratively and literally) and abusers become the abused. A sense of emotional uncertainty is not helped by Holst’s tendency to end every scene with a loaded, broody stare off into the middle distance – a technique which when taken with the no doubt historically accurate but undeniably stylish costuming (see Burberry Prorsum menswear fall/winter 2010), not to mention the good skin and cheekbones on display, has the unfortunate effect of reducing even very good acting to a kind of modelling. This desire to keep things moody at all costs reverberates through every shot of King of Devil’s Island; including the deep-freeze setting itself. In reality the revolt took place in May, not mid-winter – a quibble, yes, but one which demonstrates the filmmakers’ reluctance to simply have faith in the facts. Elsewhere the action has been infused with some fairly pedestrian philosophical debate and humdrum symbolism involving a whale – an unnecessary attempt to get this already fascinating story to mean something, which actually has had the effect of preventing it from meaning anything very interesting. In fact it’s when meaning is momentarily forgotten, during the movie’s action sequences – a desperate escape attempt by C19 and the disturbing climactic riot sequence – that King of Devil’s Island hits some kind of stride. Here the action takes on an immediacy and emotional pull sadly lacking elsewhere, and we’re given a glimpse of the film this could have been, and sometimes very nearly is. Considering the ordeals they endured, there’s no denying that the victims of Bastøy Island deserve a film that communicates their story to the world. King Of Devil’s Island – despite occasionally coming close – is not quite it.

Previous: Star Wars Episode VII to be directed by Matthew Vaughn?
Next: Welcome to the World