Christopher Walken is one of the most prolific actors in history. His IMDb lists 115 projects that he has lent his considerable talents to, with a further 6 films in production. He is primarily known for being absolutely hypnotic whenever walks on screen, and perhaps even more so when he delivers a soliloquy with that intense and slightly mournful expression. Intense is definitely the most apt description of Christopher Walken’s acting style. This is most obvious in his evil-doer roles, something he was pigeon-holed with for a long time. Who can forget cheeky billionaire software developer Max Zorin in A View To A Kill? What about the Mozart-haired Max Shreck in Batman Returns? He’s just spectacular. 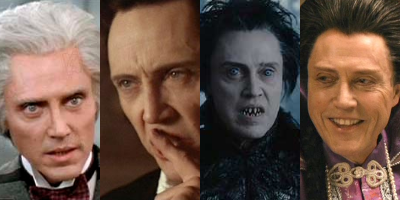 Christopher Walken has been in some fantastic movies, but he’s also been in a lot of shit. Yet it is the inclusion of Christopher Walken that makes an awful movie fantastic. The Prophecy, for instance, would be unwatchable without Walken’s psychotic stare. In every single role, no matter how bizarre or demanding, Christopher Walken always brings his A-Game. Sometimes he transforms utterly into his character, sometimes he remains indubitably and stubbornly Walken, yet he manages to steal every scene. Some actors achieve distinction one or two times in their career. Walken has done it every goddamn time. If we really had to choose the highlight of Christopher Walken’s prodigious catalogue of performances, then surely it must be this beautiful scene in Pulp Fiction. He transforms the words on a page of the script into something closer to a perfectly timed dance. Magic.

Christopher Walken was destined for the big screen from a young age. His mother had dreams of becoming a star herself, and made young Christopher and his two brothers, Kenneth and Glen, into child actors in the 50s, presumably so that she could live vicariously through their successes. She must have gotten more than she could have ever dreamed with Chris. In his teenage years he performed as a lion tamer in a circus, which explains his utter lack of fear, and he initially trained as a dancer at the Washington Dance Studio before becoming an actor, a skill which ultimately led to the greatest music video of all time:

His first starring role in cinema came with the ultra-camp 1972 sci-fi film The Mind Snatchers, in which he played a psychopath. This was going to become a recurring theme for Christopher Walken. He claimed in an interview that he has never turned down a role, but that’s not to say they haven’t turned him down. He was considered for Captain Jack Sparrow in Pirates of the Caribbean (WHAT!?) and Han Solo in Star Wars (CAN YOU IMAGINE!?). He is also an accomplished Shakespearean actor, a decent chef, a sultry singer and (in probability) a gentle yet masculine lover. Christopher Walken is the next stage in human evolution, and he doesn’t even care. What a legend. 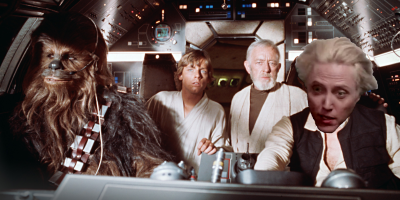 “My hair was famous before I was.”

“Christopher Walken may be primarily known by the Great Unwashed for his ‘mainstream’ roles, but his performance in Coriolanus was magnificent, and reminiscent of Orson Welles or Sir Lawrence Olivier.”

“Right, Chris. Let’s call Al Pacino over and we can have a competition to see who’s the better crazy-old-guy.” 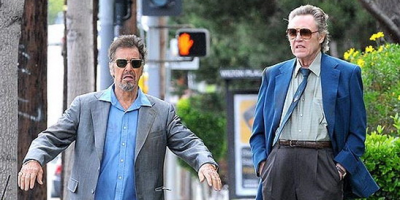 There have been people who have built their career on impersonating Christopher Walken, but for a man who so frequently plays violent psychopaths he’s awfully self-effacing and humble. Many people think that chucking a bit of Walken in your film is a gimmick, along the lines of a Nicolas Cage appearance, but this comparison is an insult to such a well-renowned and established actor. The man is a phenomenal actor, as his Best Supporting Actor Oscar for The Deer Hunter can attest. From his vertically-straining hair, to his bizarre New York-meets-John Travolta accent, there’s nothing about Christopher Walken that isn’t absolutely fascinating. Check him out when Seven Psychopaths hits cinemas on 5th December 2012.

Anything else you think we should know about Christopher Walken? Drop us a comment below!

Previous: Our Family Wedding
Next: End of Watch