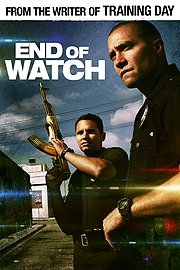 David Ayer loves writing cops. After Training Day, S.W.A.T. and Street Kings, it’s fair to say the man has a comfort zone. Geographically speaking, that zone is located firmly in L.A.’s South-Central area, and it’s here that End of Watch files itself neatly alongside Ayer’s previous work. Conversely, leaving behind the corruption and dodgy dealings that coloured breakthrough film Training Day, Ayer’s latest is an uncharacteristically firm-handed salute to the LAPD and the familial nature it engenders. Diving headlong into the morass of everyday crime that seems to positively waft upward from L.A.’s streets, End of Watch follows the partnership of two young officers as they work a beat different to that of your average flatfoot.

Police partners and firm friends, officers Brian Taylor (Gyllenhaal) and Mike Zavala (Peña) spend every day creeping the streets on the lookout for “dope, money and guns.” True believers in the letter of the law, the duo are worlds apart from anything Ayer has depicted before. Following a series of leads after a successful bust, they end up on an especially vicious cartel’s hit-list. Ayer tasks himself with balancing the constant threat of danger with recent developments in the officers’ lives at home, trying to relate a job alternately thankless, exhilarating and one-of-a-kind. He mostly succeeds. The core of the film is the front of Gyllenhaal and Peña’s black-and-white cruiser, the two actors’ bantering and tangible friendship transcending the bro-tastic dialogue. Singularly, their charged performances elevate End of Watch far beyond what might have been a dreary exercise in chest-beating.

It helps that Gyllenhaal is a hell of an enthusiastic and very likeable actor. Even with a shaved head and posing cockily behind a pair of mirrored glasses, his clear enjoyment of playing a lawman shines through. It colours both officers, whose understanding of their job is defined equally by a militaristic sense of brotherhood and a bouncy ebullience that comes from playing too much Grand Theft Auto. Fleshing out the former aspect, Ayer is at pains to reinforce how tight the LAPD and their families are with one another; as a result, a lot of the dialogue is of the “dude, I would totally lay down my life for you” ilk. It should seem grossly over-egged. But Gyllenhaal and Peña underpin all the chest-puffing and macho rhetoric with sardonic smiles, hinting at a feeling that this is just how cops are supposed to behave. More to the point, the fact that these cops do behave how cops are supposed to behave – i.e. uphold the law – is bizarrely refreshing. It’s not Dixon of Dock Green, but the fact that Ayer’s largely succeeded in writing a cop drama not based around endemic corruption is worthy of applause in itself. 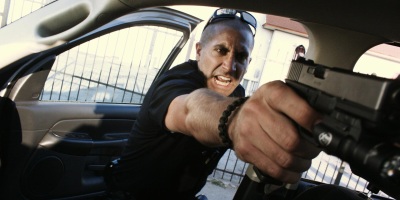 Both actors spent five months training for their roles, going on 12-hour ride-alongs and becoming real-life friends in the process. It shows, and their ease with each other helps kick some of the more underdeveloped characters under the rug without too much fanfare. As Gyllenhaal and Peña’s respective other halves, Janet (Anna Kendrick) and Gabby (Natalie Martinez) have little to do except wring their hands over the understandably punishing role of being a cop’s second partner. It’s here that Ayer takes his foot off the pedal, and while scenes beyond the LAPD are still enjoyable, End of Watch loses momentum at a few critical junctures in its attempt to give the whole picture of police life. It might have sacrificed a little breathing room, but for a film that seeks capture just how all-consuming a life on the force is, Ayer could have easily resisted a look-in at Taylor and Zavala’s home lives. So much information is relayed between the two regarding Janet and Gabby, they exist enough without having to divert attention from the task at hand. Namely chasing dope, money and guns, which is where End of Watch really comes to life.

Ayer shoots the film through a variety of perspectives, and it’s a wonder his technique isn’t more jarring. Taylor is recording footage for a film project, so that takes care of all the angles seen in the squad car, with a risible pair of badge-cams helping out with much of the shot reverse-shot dilemma. It’s intended to get us up close and personal with the nitty gritty of police work, and while a breathless way of doing things, it’s not completely necessary. In fact, Ayer often forgets the whole found-footage kick and it’s not to the film’s detriment. Almost all of the ground action is hand-held and provides enough ‘realism’ for End of Watch‘s docu-drama look. Sometimes, the cuts to first-person gun-cam and windshield POV car angles have the opposite effect of Ayer’s intention, throwing the film into videogame territory. Again, it’s testament to Gyllenhaal and Peña that a rather ill-conceived visual style is left remarkably transparent in the wake of their constant persiflage. 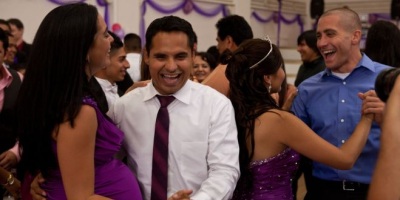 End of Watch can’t completely hide its flaws behind the two standout performances, but it damn well nearly succeeds. Being on the right side of the law has rarely felt so invigorating, and it’s hard not to get swept up by the classroom bro-namics during roll call or on the beat. Sometimes it feels like a guilty pleasure, but for the most part it’s a thrilling tour through South-Central L.A. in the company of one of the best duos we’ve seen in a long time.