GODDAMNIT that delivery is perfect.

In 1983 film The Dead Zone Walken plays Johnny Smith, a young man who wakes from a coma to find that he has developed a rather pesky supernatural ability. His skill, later ripped off in M. Night Shyamalan’s Unbreakable, is being able to see into someone’s future simply by touching them.

Thus, after feeling up this random teenage boy, Johnny happens to see him falling through some ice and totally dying. Cue a big argument with the boy’s dad and Walken treating us to some delicious crazy rage. But come on, we can see the dad’s viewpoint here. Would you trust that guy? He looks like he goes into bus stations and tells people the end is nigh.

Being a murderous German horseman isn’t as easy as it looks. Nobody accepts you for who you are and everybody tries to kill you just because you look different and you’ve filed all your teeth into points for no discernible reason. 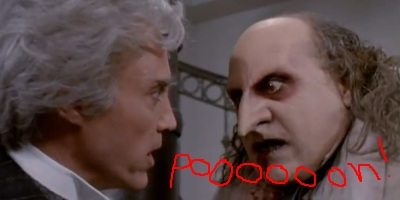 We know what you’re thinking. That’s just a photo, that’s not a video! You’re exactly right, but if you click on it and skip forward to 3:55 you’ll be able to hear Walken uttering some magical, immortal words. Yes you may have missed this moment during past viewings. But it DEFINITELY happens. WE PROMISE.

We love this a lot (do you think it was in the script or an improv? Please let it be an improv) but in an ideal world he’d be working some Walken-esque emphasis on it. PoooooonTANG!

The reason this is so perfect is because you can genuinely imagine Walken saying this to you in real life. Sure, as an old man he’s got a kind, crinkly face that makes you want to sit on his knee but as a young man with his oddly smooth, alien-like features, Walken played deranged emo pretty easy.

So it turns out our favourite dialogue from the widely-admired film Gigli is not actually the notorious “Gobble, gobble” exchange, it’s THIS WEIRD SHIT.

Have you watched it? Please please just watch it. You don’t need to know the context because there is no way the things he is saying here could possibly have a context. Have you watched it now? Good. Here is a transcription of the words that just came out of his mouth, in case you missed that:

…go down to Marie Callender’s…get me a BIG bowlpiesome ice cream on it mMMMmm gooood put some on your HEAD! Your tongue’d slap your brains out trying to get to it…inteRESTed?…suRE?

This makes so much sense it hurts (the pies on) our heads.

Though we like to jest about him, we should never forget that Walken is actually a great actor.

In this scene from Michael Cimino’s 1978 film, severely traumatised Vietnam war vet Nick (Walken) plays one last round of Russian roulette with his buddy Mike (Robert De Niro). Unsurprisingly, it doesn’t end well. And though Walken barely says a word in this scene, his vulnerable, child-like silence speaks volumes.

Already cemented firmly in our minds as one of Walken’s best performances, this scene in particular stands out to us.

Though Željko Ivanek’s turn is brilliant, Walken steals the scene for us with his delivery of the line “I don’t want to”. What a cutie pie. And don’t forget that Seven Psychopaths is out on the 5th December!

Our favourite moment in this scene? No, it’s not the reference to the watch being up his ass. It’s the big fuck off seven second pause at 0:59. Who else but Walken could pull that off? Glorious.

Yes, Walken has acted in a buttload of great films but we’re fairly certain his finest ever onscreen moment was dancing his way through the video for Fatboy Slim’s “Weapon of Choice”.

Look at him! Dancing away as though it’s the most natural thing in the world. Almost sixty when this was filmed, Walken has all the easy, laid back grace of a professional dancer. What’s more, it’s just SO Walken. There’s something about the way he moves his arms and looks at the camera that reminds us of every performance he’s ever done. It’s weird, it’s wonderful, it’s utterly distinctive: it can only be Walken.

Think we’ve missed any important moments off our list? Concerned that we haven’t included enough puns? Close to Walken out of here if we don’t continue to talk about Christopher Walken for the remainder of our days? Well worry not. WE’LL KEEP WRITING WALKEN IF YOU KEEP READING WALKEN.

Previous: The Oranges
Next: Orange(Wednesday)s and Lemons #94