In life we all go through battles. Battles ranging from the epic to the fairly mundane. If you stop and think about it though everyday there is some kind of mini war happening in your life. You vs Traffic, Man vs Boiler, Tessa vs John… Each fight has varying degrees of success (boiler always wins) and we must take our victories when they come. What would you do however if your next great fight involved something more Biebery, more mongoosey, more mega sharky then you ever dreamed possible? Read on warriors and thank your lucky stars that you are not up against one of these bad boys… 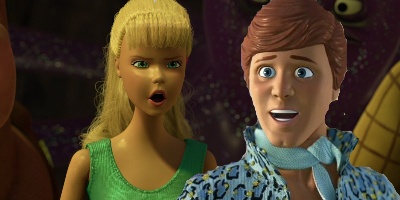 Plot: Things had been going so well for Barbie and Ken! The Dreamhouse had just been redecorated and the jeep had a new set of super shiny wheels. Barbie has just been promoted at the investment bank (go with it) where she works but uh-oh…Ken feels threatened and to assert his masculinity makes one huge mistake. Barbie comes home one day to find Ken…in bed with Hispanic Teresa, the woman undermining Barbie at work! Barbie is pissed. Especially because Ken is trying to take Barbie to the cleaners in the divorce, with some incriminating photos from her days as a Hooters waitress she doesn’t want her boss to see. Think Kramer vs Kramer only shinier. Oh, and Ken’s a spy. They have a lot of Matrix style fights.
Who would direct it? Sam Mendes (Revolutionary Road)
Who wins? Barbie has a pilot’s license. She crashes her plane with Ken in it. They both die. 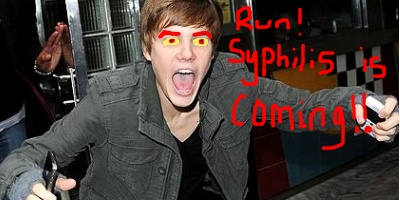 Plot: One dark, stormy night, Justin Bieber is casually on his way home from a gig…when he thinks he is being stalked by someone or something. A few nights later, a mad fan with a hideous, deformed, demonic face breaks into his dressing room when he is alone and attacks him. Bieber blacks out and can’t tell police exactly what happened. Soon though strange things begin happening to Justin. Is he being hunted down by a something evil? Or is he going maaaad? And what is that strange burning sensation when he pees?
Who would direct it? Sam Raimi (Evil Dead Trilogy)
Who wins? Syphilis. Yaaay! 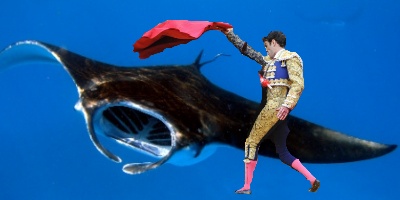 Plot: A retired Matador moves with his family down to the Spanish coast. A few years ago he lost his leg in a bull fight and has lived as a recluse ever since. One day his son Alejandro persuades him to come out to the beach and the Matador finds that he is actually a great swimmer (despite the stump). Meanwhile just down the shoreline, a Spanish test facility accidentally release a giant Manta Ray into the sea that begins to eat the locals. Putting aside the trauma from his past, the Matador must once again get ready to fight. One. Last. Time. He has a wetsuit mixed with a matador’s costume. And lures the Manta Ray into a trap with some chorizo. Then says ‘¡Olé!’ a lot. Feel free to throw in as many stereotypes as you like…
Who would direct it? Ed Wood, obviously.
Who wins? The Matador kills the Manta Ray but is fatally wounded. He floats out to sea on its back never to be seen again. 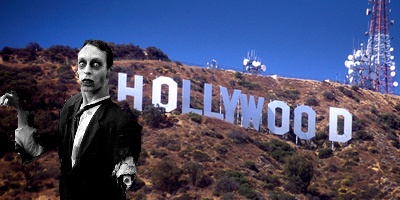 Plot: A crazy scientist living in L.A decides that the world needs a bit a spicing up and so decides to unleash a zombie plague onto mankind. However something goes terribly wrong and instead of conjuring up a zombie army he manages to only create one lonely flesh eater called Francis. Living with the scientist and surrounded by the leggy beauties of downtown Los Angeles, Francis is torn. Does he eat them and feast on their brains, or go against his nature and try to fit in? Will the Hollywood big-shots accept him or parade him in horror movies to make a lot of money? Depression sets in and soon Francis turns to drink to stop himself from eating human flesh. The scientist and his beautiful assistant must try to find a cure for Francis before it is too late.
Who would direct it? Tim Burton (Dark Shadows)
Who wins? Existentialist Crisis. Francis is sent back to hell where he belongs. 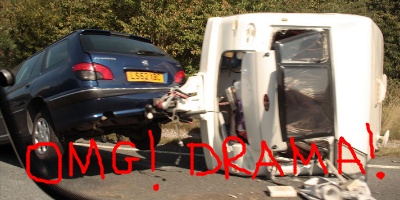 Plot: Like Duel! Only slower… One summer’s night, Alan, a sensitive down and out type, is driving his caravan across England to London where he is going for a job interview. However in the early hours of the morning he notices that a strange tractor has been following him for many miles. What does this tractor driver want? Could it be the illegally harvested corn Terry has in the back of the caravan? Cue slow chase scenes as the tractor tries to overtake the caravan and angry farmers whose crops get destroyed in the manic game of cat and mouse.
Who would direct it? Tony Scott (Man on Fire)
Who wins? Tractor. You shouldn’t be able to drive your house around. 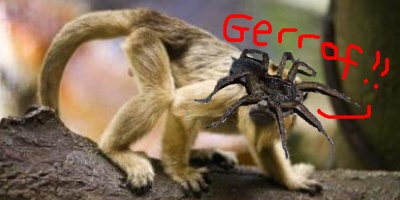 Plot: An animated adventure comedy for all the family! Deep in the rainforest of the Amazon, a group of monkeys live together in harmony. All that is except for Howlie, an orphaned howler monkey who feels like he just doesn’t fit in with the others. He is missing a paw which was lost in the attack that killed his parents and the other monkeys all make fun of him for it. One day the news that a gang of evil spiders are on their way arrives in the monkey colony and Howlie decides that this time, despite his failings, it will be him who takes on the invaders and save the monkey community.
Who would direct it? Any Disney/Pixar/Dreamworks stalwart will do.
Who wins? They both do, leaving the path open for Spiders vs Monkeys 2: Spider Monkeys! 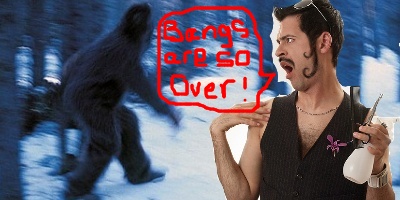 Plot: It’s the 12th International Hairdressing Awards and this year it is being held in Tibet! As a group of flamboyant hairdressers from Leeds make their way to the competition their plane gets caught in a terrible storm over the Himalayas and crashes. Lead by the feisty Terrance, the survivors must battle the snow and wind in order to survive but are soon up against a deadlier foe…YETIS! Armed only with hair scissors and razors and those pointless squirty water bottles, the hairdressers must face their hairiest challenge ever and snip their way to victory!
Who would direct it? Christopher Smith (Severence)
Who wins? Hairdressers. They cut all of the fur off the yetis who freeze to death in the snow. 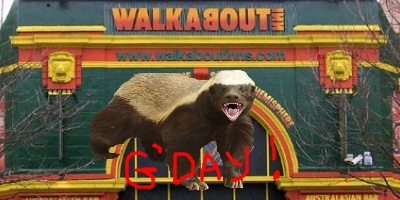 Plot: Saturday night in Leicester Square, London. Inside the Walkabout bar a group of ex-pat Aussie barmen (and women) are preparing for another night of raucous drinking, sticky floors and sex in the bathrooms. However things soon take a turn for the (even) worse. The previous weekend a nerdy zookeeper’s assistant, Davey, confessed his love to Sheila the bargirl but was brutally rejected. To exact his revenge, Davey unleashes a crate of Honey Badgers injected with adrenaline into Walkabout and seals everyone inside. With the ferocious HBs on the rampage how will the Aussie Barmen get everyone to safety with only a few barstools, broken bottles and Fosters to help them?
Who would direct it? Simon Pegg (Directorial debut)
Who wins? Honey Badgers! They break free into London and take over the world.

#2 – Kim Jong-Un vs Democracy vs MONGOOSE! 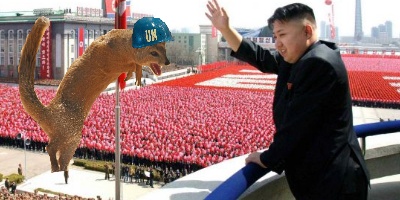 Plot: North Korea. Wise, Respected, Brilliant, Unique Leader Kim Jong-Il is dead and his fat son is taking the reins. The UN decides that democracy must be established in the mysterious country and knows just the right creatures for the job…MONGOOSES (rarely ever mongeese…) Armed with a moral code of conduct and UN helmets, the mongooses are air dropped into North Korea with a mission…restore freedom to the people, or face death.
Who would direct it? Trey Parker and Matt Stone (Team America)
Who wins? MONGOOSE! The Mongooses take over and stick two furry fingers up to Jong-Un and democracy. Double crossing mongeese… 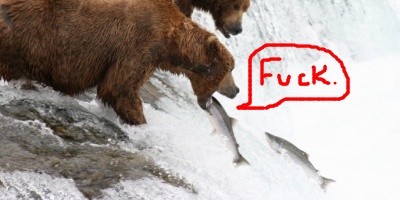 Plot: Never has there been a more perfect metaphor for human life than watching a fish battle with a current. After the mixed success of Dinosaurs vs Jesus (otherwise known as The Tree of Life) Malick would be the ideal person to bring this epic struggle to the big screen. The plot? There is no plot. Arthouse beauty and perfection reaches the apex with this daring and thought provoking masterpiece. 3 hours. One salmon. One river. Will the salmon make it? You should actually ask…will we make it. Academy Award winning gold.
Who would direct it? Terrence Malick
Who wins? It’s too deep to comprehend.

Who needs Cockneys vs Zombies after all! Any other ideas? Let us know and let’s get it made.

Previous: John Goodman to be bad man in The Hangover Part III
Next: The Expendables 2