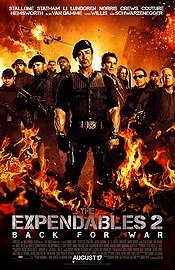 In the sexy, gravelly tones of a partial stroke victim, Sylvester Stallone can be found on YouTube saying that, in writing The Expendables franchise, he wanted to bring back “old time rock and roll” to action movies. In which case, I think he can have himself another celebratory cigar. The Expendables 2 takes more than a dozen action superstars, all of them over 40, some of them nearly 70, and creates something that never tries to be anything more than good old fashioned entertainment. 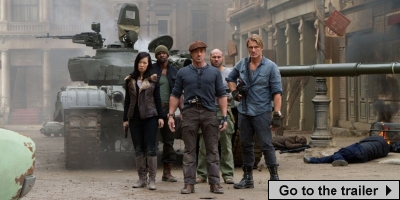 You won’t miss anything if you haven’t seen the first one, but to get you up to speed, the Expendables are a band of aging, but super-elite, mercenaries led by Sylvester Stallone, who spent the first film overthrowing a Latin American dictator who turned out to be controlled by a deranged ex-CIA officer. Not that anyone remembers the plot, all anyone remembers is that Stone Cold Steve Austin got set on fire and there were literally loads of knives. Jason Statham, Jet Li, Dolph Lundgren, Terry Crews and Randy Couture make up the team; they have muscles so large they have difficulty moving and they’re called things like Hale Caesar, Toll Road and Yin Yang (guess who they gave that last one to).

The second instalment begins exactly as it means to go on, with the Expendables in tanks smashing their way through a stronghold somewhere ambiguously Asian. Smash smash smash explosion explosion knife through the heart henchmen running in to die someone’s head’s exploded how did we get onto this plane oh we’re safe fist bump. I counted 17 separate pieces of popcorn down my cleavage by the time the wildly gratuitous title had smashed onto the screen. Take note The Bourne Legacy, that’s how to do an opening. 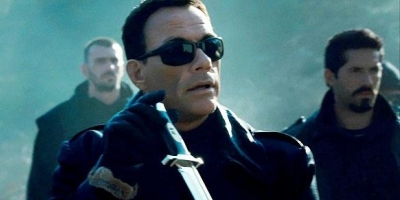 The team set out for what should be a simple task, only for it to go horribly wrong when they’re intercepted by the villain, Jean Villain. Evil rival mercenary Villain is played by Jean-Claude Camille François Van Varenberg (professionally known as Jean-Claude Van Damme) and the Expendables set out to seek their revenge. Chuck Norris shows up, so does Schwarzenegger and I’m told that Novak Djokovic has a cameo as himself and kills three terrorists with a tennis racket. I’m serious when I say that if you manage to spot him, will you please tell me where.

A girl joins the team this time around (they need her to dismantle a bomb or something) and Yu Nan, as Maggie Chan, wins the film a star all by herself. Attractive, but not your classic guns + boobs + tight leather trousers hot, Chan responds to Stallone’s complaints that he’s not a babysitter by announcing that she’s ‘combat proficient’. *Sigh* you think to yourself, she’s going to be that by-the-book girl, fresh from CIA training who cries because it’s not like she imagined. But actually, Chan absolutely holds her own – she’s smart, she’s ludicrously combat proficient and she never even gets close to taking her clothes off. When she and Ross part ways at the end, it’s with the mutual respect of two professionals. 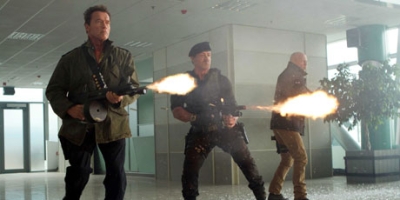 As characters, the Expendables give off a vibe of begrudging respect for one another that you get the impression isn’t really acting. You can imagine the endless meetings that went on with the egos of every cast member being individually soothed by the production team. ‘I heard that Stallone gets to bite Van Damme’s ear off’ ‘Statham says he gets to beat a man to death with his own severed arm’ ‘Why can’t I fight an ocelot?’.

The Expendables 2 is a silly, violent tribute to a time when its stars were real stars, but it told you it was going to be, so you can’t complain. Instead you can sit back, wide-eyed, and throw popcorn in the general direction of your face while soaking up some good-hearted, self-deprecating entertainment complete with some outrageous one-liners and literally loads of knives.