Character Posters for Your Highness 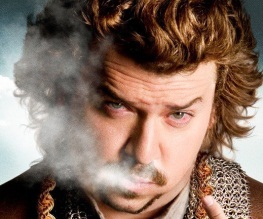 To stir up audiences’ anticipation for fantasy-action comedy Your Highness, out on April 13th, Universal have released some character posters of Natalie Portman and James Franco looking all noble-like, and Danny McBride…not so much. The film is a reunion for Pineapple Express team McBride and director David Gordon Green, who were joined by writer Ben Best to dream the project to life. With Franco (another Pineapple Express actor) aboard, audiences will at least know what kind of humour to expect, borne out by a trailer which showcases plenty of swearing, gratuitous shots of Portman in a thong and weed jokes. The stoner-and-swords comedy follows the quest of two princely brothers Fabious (Franco) and Thadeous (McBride) to rescue Fabious’ fiancée Belladonna (Zooey Deschanel) from the clutches of evil sorcerer Leezar (Justin Theroux). On their journey they are aided by beautiful kick-ass warrior Isabel (Portman) and stumble across plenty of dragons to fight, pot to smoke and other fantasy necessaries. As long as not all the funny bits have been chucked into the trailer (a common comedy crime) it looks like it could be a decent offering from McBride and the crew. http://credit-n.ru/zaymi-listing.html http://credit-n.ru/blog-single-tg.html