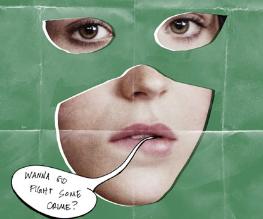 For those who have yet to see the Super trailer, before anything else go here and watch it. It’s lovely. Sure it (and the poster below) looks a bit like it’s treading on the toes of Kick-Ass and Scott Pilgrim, but as long as we’re laughing we’re not too fussed.

Super follows the mental breakdown of a middle-aged man (Rainn Wilson) whose hot wife (Liv Tyler) leaves him for a younger, more sturdy-ly jawed man (Kevin Bacon). In the midst of his grief, he decides that the only way to fight back against the injustice of it all is to become a self-made superohero. Thus, The Crimson Bolt is born. “SHUT UP, CRIME!” So there’s no denying that director James Gunn is pulling inspiration from recent anti-superhero hero films (Crimson Bolt/Red Mist? Even Ellen Page’s tagline “Wanna go fight some crime” is a line stated by the Mist in Kick-Ass…) but it still looks like good fun. Will you be going to see it?

Previous: Character Posters for Your Highness
Next: Battle: Los Angeles