Do you have Great Expectations for this trailer? 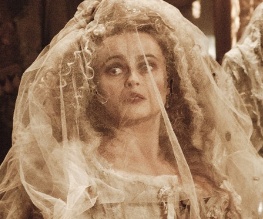 Do you smell something hammy? Then it must be yet another adaptation of Dickens’ Great Expectations only this time with extra scenery chewing courtesy of Helena Bonham Carter. Yes, yet ANOTHER bloody remake of a remake of some mouldy old book. Well actually, the book is rather good. We just are wondering why we need another film version. At least Gwyneth Paltrow isn’t in this one. She’s too busy GOOPing all over the world.

In case you haven’t seen one of the numerous film adaptations, TV versions or bothered to read the book; the story follows the life of young orphan Pip (Jeremy Irvine) who falls for a beautiful girl called Estella (Holliday Grainger). Estella lives with her bonkers aunt Miss Havisham (played by equally bonkers Helena Bonham Carter) who wants to use her niece to exact revenge on men. Pip comes into money donated by an unknown benefactor and moves to London to be integrated into society. However even now that he is rich he is still shunned by Estella and her manipulative aunt. Also there is an escaped convict called Haywitch (Ralph Fiennes) to contend with who causes mayhem in Pip’s life. It’s all here in the trailer (we have no idea why it has German subtitles):

So what do we have here then? By the looks of it Holliday Grainger will always be walking one step ahead of Irvine as she acts all snooty and looks all ginger, Bonham Carter will even chew Irvine’s face off in a mad attempt to steal every scene and Irvine is so blind he can’t see a mahoosive ship coming up on him from behind. Still it’s got Robbie Coltrane in it and we love Robbie Coltrane.

Great expectations? Probably best to keep them low so as not to be too disappointed. The film is released in cinemas on the 30th November.