Jeremy Renner complains all the way to the bank 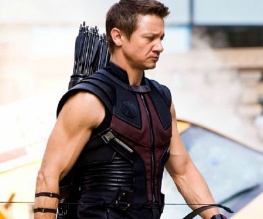 The Dark Knight’s reign has already come to an end as he is shoved off the top spot by Aaron Cross. The Bourne Legacy opened in the US this weekend took in $40.3m which is a pretty serious amount of cash considering that Mr Bourne himself isn’t even in the film. The Cross Legacy probably wouldn’t have had quite the same pull though we imagine. You would think that all of this would make Jeremy Renner pretty happy? Think again…

Renner has decided that amidst all of this Bourney glory that now is the time for whinging. He has come out and said that he was ultimately unhappy with how his character Hawkeye was portrayed in Avengers Assemble and that “for 90% of the movie, I’m not the character I signed on to play.” We have to admit that we are actually with Renner on this one. Hawkeye blows! We only have one place in our hearts for arrow firing furies and we are afraid that she is blonder, boobier and more Katnissy than Renner ever could be. We feel a bit sorry really for old Jezza. Hawkeye doesn’t really get to do much as he falls under Tom Hiddleston’s spell in Avengers Assemble ridiculously quickly limiting his role to that of a Terminator-esque vacant robot. (We fell under Tom Hiddleston’s spell ridiculously quickly too, but that is a different story).

Hopefully this massive injection of cash will help him to feel a bit better though. And certainly it will make Christopher Nolan feel a bit worse considering that not only has he been knocked off from the number one spot, he is now at number three as even Will Ferrell and Zach Galifianakis have overtaken him with The Campaign which made $27.4m in its opening weekend. So cheer up Renner, things could be worse.