Matterhorn ride gets a film adaptation 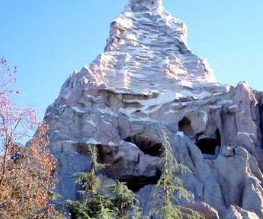 What do you do when there’s no ideas left to be had? Squeeze the rancid juices from ideas long dead, of course! It looks like the fossil fuels of Hollywood’s creativity have been thoroughly used up, and it’s time to look to the wind farms of utter bollocks. In short, another Disney ride is being made into a film. Fuckssake.

The ride? The Matterhorn. The premise? It’s a snowy mountain-top toboggan ride that was build in 1959. The film version (the film version of this ride? WHAT THE HELL HAS HAPPENED TO THE WORLD) will revolve around some kids who get trapped on a mountain, and they find some monsters. Stuff will probably happen with the kids and the monsters, we expect, and Disney will make a bit more money and stick a massive poster on the ride and more people will go on it. And Johnny Depp will play “crazy hill man” and he’ll get his own spin-off franchise called “Crazy Hill Man: The Movie” and then he’ll get his own ride, and the time-space continuum will collapse out of pure despair.

Anyway, looking forward to it.

Previous: Arrietty
Next: New Three Musketeers trailer. Give us strength…