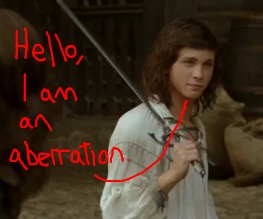 There doesn’t seem to be any point in swimming against the tide now – The Three Musketeers is clearly going to happen, and nothing short of a full-blown nuclear holocaust is going to stop it. Does anyone have concrete info on the sort of thing (other than, like, freedom) that really pisses Hu Jintao off? We need the People’s Republic like never before – this film must not make it to the cinema:

Right, we’ll get through this as quickly as possible. Further crass plagiarising from Assassin’s Creed? Check. Complete rewrite of the (admittedly dastardly) Milady so she becomes some sort of Regency Lara Croft figure? Check. Climactic battle scene which, despite being in mid air, is totally ripped from Pirates of the Caribbean? Check. MORE FUCKING AIRSHIPS? Check. And that’s even before we’ve discussed Porthos’ moustache, the Duke of Buckingham’s hair or d’Artagnan having an American accent. GAAAARRRGGGHH.

Will you stab Paul WS Anderson, or must we? Let us know soonest, please.

Previous: Matterhorn ride gets a film adaptation
Next: The Wolverine back in action