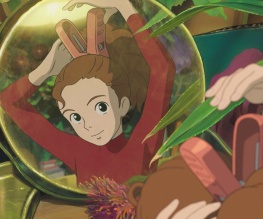 Arrietty, the latest film from critically acclaimed Japanese production company Studio Ghibli, breathes new life into the classic story of the Borrowers, a race of tiny people who live unseen in the houses of big folk like us and ‘borrow’ what they need to survive. Transposing the Borrowers’ story from Leighton Buzzard to suburban Japan, director Hiromasa Yonebayashi has created an enchanting film which leaves previous adaptations in the shade and more than deserves its place in the exalted Ghibli canon.

Sho (Holland) is a sickly boy sent to live with his ageing aunt while he rests in preparation for a risky operation. He expects to spend his time looking wistfully out of his bedroom window, as sick children must, and wondering who built the beautiful dolls’ house on his dresser – or, in fact, doing anything other than discovering the existence of tiny people hiding in the bowels of the house. For tiny people there are! As he arrives, Sho catches sight of headstrong young Arrietty (Ronan), one third of a family of Borrowers who live under the floorboards of the hall closet and are, as far as they know, the last of their kind.

Arrietty’s stoic father Pod (Strong) is a fearless adventurer who spends every night traversing kitchen table cliff faces and abseiling down curtains in pursuit of the things he needs to ‘borrow’, whilst her mother Homily (Colman) is an inveterate worrier with a penchant for requesting unnecessarily difficult borrowings (have you tried picking up a tissue when you’re only three inches tall?).

Despite the ever-present dangers of cats, crows and, worst of all, discovery by humans, they’ve carved out a comfortable little life – until, that is, the night Sho arrives. That particular evening also marks Arrietty’s first trip into the house as a bona fide Borrower, and when she carelessly lets the curious and lonely invalid glimpse her it’s clear that everything will change. Will the Borrowers have to abandon their house and seek fresh lodgings, or will less sympathetic humans than Sho catch up with them? You have almost certainly never seen a film as visually and aurally captivating as Arrietty. Studio Ghibli’s trademark perfectionism is apparent in every frame, whether the audience is presented with Sho’s or Arrietty’s view of the world. The switch between perspectives is admirably handled; Sho’s bedroom, for example, is presented both as a rather lonely and featureless sickroom and as an cavernous, alien world which must be traversed with care and skill. Tiny details which would never occur to a casual reader of the Borrowers books are brought to life with a delicacy which instantly transports the viewer into the picture – a refrigerator emits an echoing hum, the ticking of a clock deafens and tea is poured in individual drops the size of apples, whilst a heavy raindrop is quite enough to drench. And who needs a ball to play with when you have a friendly woodlouse?

Hiromasa Yonebayashi’s work as a director and storyboarder (amazingly, this is his first film behind the camera) betrays his background in intricate animation, with every shot flooded with exquisite and intoxicating complexity – look out for the split second in which our personal favourite detail, a quill made from a fly’s wing, hides in the background. Although we haven’t yet had a chance to see the subtitled original, the English dub is fluid and not at all distracting – in a pleasing Ghibli first, a British English dub has been produced as well as the inevitable American version. Saoirse Ronan, Mark Strong and Olivia Colman all imbue their characters with humanity and grace, although Ronan’s bold and outspoken Arrietty is the inevitable highlight. The obligatory dose of ecological moralising feels very slightly contrived, but it’s a forgivable wobble in what is otherwise a damn near perfect film. From the moment Totoro’s silhouette fades from the Studio Ghibli logo and the opening bars of Celtic-infused theme ‘Arrietty’s Song’ (which recurs throughout and somehow suits every scene better than the last) wash over you, you will be utterly entranced by Arrietty. Combining world class animation with a captivating story, it is a memorable debut from Yonebayashi and a fitting tribute to Mary Norton’s timeless tales. Do. Not. Miss. This. Film.

Previous: Orange(Wednesday)s and Lemons #26
Next: Matterhorn ride gets a film adaptation