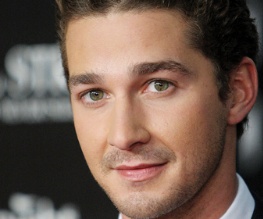 Oh god, Shia LaBeouf has got a mouth and has decided to start using it. Sadly he doesn’t have a brain though, so pretty much everything that comes out is pure drivel. LaBeouf has decided that he has now been burned too much by the big studio system and is bowing out of blockbusters whilst he still has some kind of reputation left. Oh hang on, he was in Kingdom of the Crystal Skull… too late.

In a recent interview LaBeouf declared that he was the driving force behind getting Lawless made and that he will only take roles where he or the director can have some sort of artistic input. Hence why he is about to begin filming on Lars von Trier’s Nymphomaniac where there will be a lot of input…mainly into Charlotte Gainsbourg.

LaBeouf has also apologised for slandering Indiana Jones at Cannes which destroyed his relationship with director-meister Spielberg. NAHT cool Beoufy! No one like you can take a shot at Spielberg. Yeah Crystal Skull was dire but you were IN the bloody thing and that added a lot to the film’s problems.

Apparently the reason LaBeouf wants to act with von Trier is “because he’s dangerous. He scares me. And I’m only going to work now when I’m terrified.” Well that makes two of us. We’re always terrified too when we see you “work”… http://credit-n.ru/ipoteka.html http://credit-n.ru/offers-zaim/creditter-srochnye-zaymi-online.html