First trailer for The Last Stand 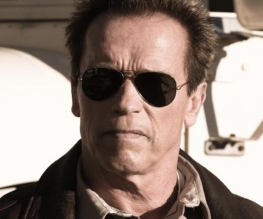 It’s here, it’s here – Arnold Schwarzenegger pretending to be a small-towm All-American sheriff complete with dulcet Austrian twang. Mr. Schwarzenegger (65), currently exploding and punching on The Expendables 2, has just released the trailer for his next project, Korean director Kim Ji-woon’s The Last Stand.

The premise is that America’s Most Wanted drug lord has broken out of prison and is making for the Mexican border at high speed. Schwarzenegger is Ray Owens, the local sheriff of a sleepy town who’s going to throw some badass shapes to stop the baddies getting through. Jaimie Alexander, last seen wielding her Nordic sword as warrior Sif in Thor, gets a look in in the trailer, now wielding a massive semi-automatic, and there’s Jackass‘s Johnny Knoxville, feeding ammunition into Arnie’s machine gun in what looks like a helicopter. Check out the trailer and wonder why people don’t learn that when you say “it’s my day off – it’s going to be a quiet weekend” then SHIT IS IMMEDIATELY GOING TO GO DOWN!

It’s all very nice, very explodey, very chasey-through-the cornfield but it’s hard to see if there’s going to be a decent plot or anything resembling ‘acting’ under all that gunfire and broken glass. The cast line up is pretty impressive, it’s got Forest Whitaker for heavens sake, so hopefully everyone gets some decent lines as well as industrial-sized weapons. There’s certainly going to be a lot of old jokes but is it the return to form with ‘serious roles’ Arnie promised? We’re not sure yet.