The Huntsman. Not a flake of snow in sight. 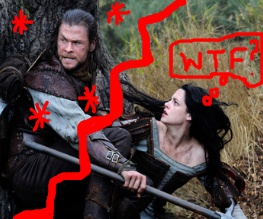 Something fishy is going on in Hollywood at the moment it seems. It looks as though men are buddying together and trying to screw over certain lady folk…namely a sullen brunette, whose affair with a co-worker was splashed all over the front page of every rag from here to Timbuktu. Yep, despite making double its production budget at the box office (Twihard fans probably have a lot to do with that) the planned Snow White and the Huntsman sequel will be going ahead minus one of the title’s leads.

Details as to why K-Stew has been axed out of the way by Chris Hemsworth remain as shady as a leafy glen, but some are saying that Miss Stewart’s off duty activities might have something to do with it. If this is true then hopefully Rupert Sanders will be axed from the project as well, or we may all burn our bras in protest. Other rumours are that Kristen Stewart is now just too expensive for studio Universal to afford but quite frankly that sounds like a pretty lame excuse.

The sequel will now just focus on the axe-wielding, brick-shithouse Huntsman and his adventures through even more woods. Original scriptwriter David Koepp has dropped out of the project as it is no longer the film he signed up to do without Snow White, so Universal are seeking a new writer asap. With all of the controversy surrounding the sequel though no one is sure if it will even make it into production.

Will Sanders return to direct? Probably, knowing the male dominated film industry. Sorry K-Stew. Ultimately it was you who was screwed not just by Sanders, but every man in Hollywood.