Wrath of the Titans trailer is well wrathful 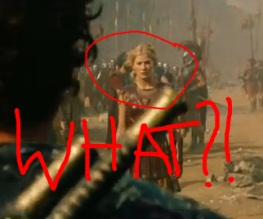 Where are you, bastards who went to see Clash of the Titans and made a sequel such a safe financial bet that Sam Worthington (not that he has any higher brain function) just couldn’t resist the pay cheque? Where are you, bastards who have kidnapped Ralph Fiennes’ children and are holding them hostage to make him prostitute himself for the sake of this nonsense? WHERE ARE YOU, TWATFACE MONSTER WHO THREATENED ROSAMUND PIKE WITH A SYRINGE FULL OF AIDS?

Yeah, Wrath of the Titans looks a bit shit.

Recap. Zeus (Liam Neeson) is ailing, the Titans are kicking up a fuss again and an ostensibly mortal LAD has to be brought in to sort things out. Remind you of anything? Add to that the eight-armed two-fronted spinny sword man, lots of sharp things getting even sharper, ROSAMUND PIKE IN A BREASTPLATE WHAT THE FUCK, a massive Cyclops chappie, someone with a shockwave hammer (Jesus Christ), a SLIDEY HOUSE, a glowy trident, a massive dog and A FUCKING DOOR THAT CAN REPEL FIRE, and it looks like we’ve got ourselves another hundred-million-dollar waste of two hours. Roll on March *yawn*

Do you give a shit? Nor us.

Previous: What can we learn from the Dark Knight Rises trailer?
Next: BFF Advent Calendar – 20th of December