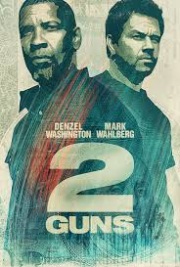 Robert Trench (Denzel Washington), an undercover DEA agent, and Michael Stigman (Mark Wahlberg), an undercover Naval Intelligence Officer, rob a bank on behalf of their respective organisations, completely unaware of the other’s affiliations. In the vault they expect to find $3 million of money laundered by Papi Greco (Edward James Olmos), but instead end up leaving with $43 million belonging to corrupt CIA agent Earl (Bill Paxton). Under orders, Stigman shoots Trench following a successful getaway, only to be double-crossed by his commanding officer (James Marsden). With the money no longer in their possession, they must work together in order to find it before Earl finds them.

As you can probably tell from the botched synopsis above, 2 Guns is a far more complicated film than it has any reason to be. While intelligence and complexity are only to be encouraged, the results here are rather more convoluted and confused. Ostensibly an action comedy, 2 Guns spends most of its running time doing neither, instead having its two characters natter on about doughnuts like it’s 1994 and Pulp Fiction is still very much the talk of the town.

Sadly, Denzel Washington and Mark Wahlberg are no Samuel L Jackson and John Travolta, and while they may boast some occasional chemistry, as characters they are never even remotely sympathetic. James Marsden and Bill Paxton, meanwhile, seem miscast as situational villains, leaving Edward James Olmos with less screentime — and therefore less scenery to chew — as the film’s only believable bad guy, the wonderfully threatening Papi Greco. As for poor Paula Patton, the less said the better.

The filmography of Quentin Tarantino isn’t the only cinematic touchstone to which Icelandic director Baltasar Kormákur (also known for starring in the Icelandic film Reykjavík-Rotterdam and then directing its piss-poor remake) owes a considerable debt. Rather than simply wearing balaclavas to rob their bank, Trench and Stigman don masks in what can only be a nod to The Dark Knight, The Town or any number of other heist films which have done the same, while the film’s aesthetic is straight out of Once Upon A Time In Mexico or How I Spent My Summer Vacation. There is absolutely nothing original about Kormákur’s film. Indeed, it would have seemed less generic if he had simply made a nuts and bolts actioner, without all of the now standard embellishments and subversions.

While never unwelcome, 2 Guns is one of the most forgettable movies you are likely to see this year. It’s yet another American movie about drugs, Mexico and the CIA with no sense whatsoever that it might in actual fact have been directed by someone from Iceland. It almost feels dated, as though someone in Hollywood has found an unused pulp fiction in the vaults, blown off most of the dust and Instagrammed it.