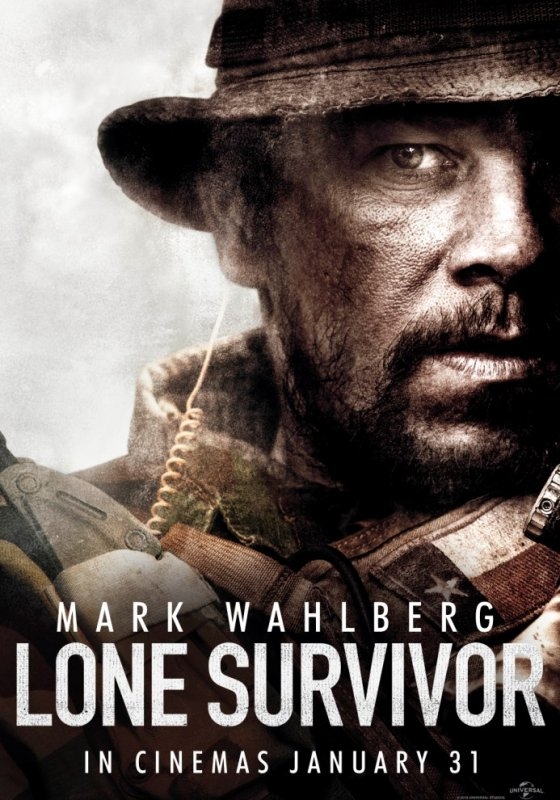 It’s 2005, and Operation Red Wings have been tasked with tracking down and eliminating Taliban leader Ahmad Shah. Navy Lieutenant Michael P. Murphy (Taylor Kitsch), Navy Hospital Corpsman Second Class Marcus Luttrell (Mark Wahlberg), Petty Officer Second Class Matthew G. Axelson (Ben Foster) and Petty Officer Second Class Danny P. Dietz (Emile Hirsch) are picked for the mission, and deployed within a few days’ hike of Shah. Things go horribly wrong when they cross paths with a trio of goat-herders, however, and with the element of surprise lost they find themselves in a fire-fight with a small army.

From the director of Battleship, and preceded by a trailer that made it look like Act Of Valor: The Movie, Lone Survivor had a fair amount to prove — particularly as it started to pick up various awards nominations. The film second-foots you immediately, however, with archive footage that sets a very different tone. Peter Berg’s film couldn’t be more different from Battleship if it tried; the two films may share an actor in Taylor Kitsch, but even he bears no relation to his part in the ill-fated board game adaptation. Lone Survivor is gutsy, gritty and almost shockingly realistic; a war film to make you wince as well as whoop. Needless to say, the aliens sit this one out.

Kitsch is great as Murphy, the task-force’s on-ground leader. After a string of failures back in 2012 it’s nice to see the actor vindicated in a role that is just as thick with bravado but is also nuanced and sympathetic. On screen, however, Wahlberg is in charge, and he gives perhaps the best performance of his career as the titular survivor, Luttrel, on whose book the film is based. The efforts look punishingly physical — the entire main cast endured three weeks of group military training, in addition to individual regimes — but what impresses most is just how exhausting it is to watch emotionally. When Luttrel says a part of him died on that mountain, you feel like you were at the funeral.

Where the film differs most from traditional action movies, and even other war movies, is in its refusal to glamourise war. Nobody walks heroically away from explosions here, and while earlier scenes set at the air base may have an air of propaganda about them the conflict itself will likely leave few feeling compelled to enroll in the Armed Forces. Berg’s commitment to injury detail is as remarkable as it is nauseating, with bullets, boulders and even the soldiers’ own bones leaving marks on the four protagonists. Though they may keep getting back up, you never for a moment doubt their mortality.

The most memorable sequence, however, is completely blood-free. As SEAL Team 10 catches a few crucial hours of sleep, they awaken one by one to find a family of goat-herders approaching their position. Their predicament is an impossible one — murder a man and his children or risk not only their own lives but the success of the mission — and is given the consideration it deserves. Their decision leads to a shoot-out that rages on for ages; in war there are no set-pieces, and Berg tracks the warring sides as they stumbles through forest and tumble over cliffs. It’s disorientating and scary and overwhelming, and it really is a wonder that anyone actually survived.

A surprisingly complex and considered action movie in which there are no heroes and no villains, in which there aren’t even civilians, only soldiers, Lone Survivor is an exploration of morality and the rules of engagement in modern warfare. It is both barbaric and beautiful, the blood and death interspersed with declarations of brotherhood and acts of incredible kindness — and, importantly, not just on behalf of America. This isn’t propaganda; it’s pragmatism.