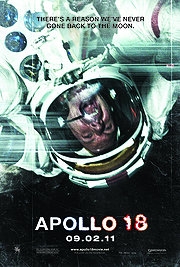 Apollo 18 testifies to be found footage from the secret space-shuttle that never made it back from the moon. The film is constructed from edited footage filmed by the astronauts themselves – how the film made it back to Earth without them is unclear. Sent to the moon to supposedly collect geological samples, astronauts Ben (Christie), Nate (Owen) and John (Robbins) soon begin to uncover secrets the Department of Defence were keeping quiet, and learn they are not alone on that giant space rock. Whilst Ben and Nate set up transmitters on the surface of the moon to apparently spy on the Russians, John stays aboard the shuttle and soon begins to hear strange interference from the transmitters. When communication between John and the others starts to fail, the real aim of the mission is uncovered and the astronauts realise they are DOOMED. The trailer had an Apollo 13 meets The Blair Witch Project feel to it, but it was a pleasant surprise to see the film wasn’t entirely made up of astronauts running around with hand-held cameras trying to capture footage of unidentified moon creatures. Instead, the “edited footage” is comprised of cameras on-board the shuttle, some planted on the surface of the moon, and the diary cams of the astronauts, creating a watchable level of chaotic cinematography. This was a brave and interesting move for a space movie, from which we usually expect epic shots of the Earth from space and thrilling action-pans around the moon, reminding us how alone those brave explorers are. Instead, the “amateur footage” establishes isolation whilst steadily building claustrophobic character bonds and providing something a bit different to watch.

The film-makers had a 127 Hours–like challenge on their hands; making two guys landing on a desolate rock exciting. They only half managed it. The build-up of the film felt far too long and was almost boring. Though establishing strong relationships between the men, it felt almost patronisingly slow. We get it, you’ve not been told the whole truth. We get it, there’s something else out there. Too much build up and not enough action made the film slightly laborious – a shame because once it got going it became an enjoyable watch. Creating believable aliens is always tricky, but Apollo 18 rose to the job admirably. Going for the unsettlingly tiny rather than the overwhelmingly massive, the film showed just enough but not too much of the moon monsters, establishing a crawling, itching sense of the aggressor, rather than relying on all-out blood and gore.

Apollo 18 focussed on psychological isolation and abandonment rather than violent battles and explosions. There were certainly jumpy elements, but as with the rest of the action, there could have been more. The slow and deliberate scene-setting was a pleasant change from hurried Hollywood Blockbusters, but more time on the demise of the shuttle’s inhabitants would not have gone amiss as the film was only an hour and a half long.

The three men were likable and convincingly valiant. Owen’s infected transformation as Nathan Walker was quite terrifying, and more time spend on this aspect of the film would have been a vast improvement. Robbins and Christie did well as the other two astronauts, though unfortunately the film did not dwell long enough on the tough decisions they faced at the mission’s end.

Overall a slow burner, but one that was thoughtful and exciting in its limited moments of action.

Previous: The Art of Getting By
Next: The Top 10 WTF Moments Of George Lucas’ Career 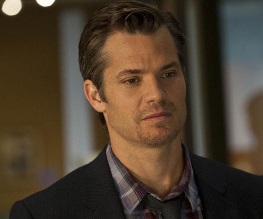