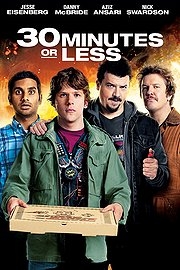 Now I don’t know if this was intentional or not, but the odd irony about 30 Minutes or Less is that it only gets good after 30 minutes.

The film opens on Jesse Eisenberg as the bumbling semi-functional stoner, a performance Eisenberg has danced out so many times we can predict him down to his every nervous twitch and self-conscious shuffle.
We know Eisenberg has a lot to live up to after The Social Network, but a repeat performance of characters he trotted out in Adventureland and The Education of Charlie Banks? It feels tired. I feel tired. But hang on. Now there’s a bomb strapped to his chest. Now it’s a crime caper. YES.

Nick (Eisenberg) plays a hapless pizza boy, twenty-something and entirely void of direction. He lives for watching action movies with his best friend Chet (Ansari), whining about his job and hanging out with his long-time crush Kate (Vadsaria). Kate also happens to be Chet’s twin sister. Chet’s not happy about this. Drama at its most yawn-worthy.

Meanwhile, we have Dwayne (McBride), a middle-aged slacker who dreams of killing his father, dominant ex-marine and lottery winner ‘The Major’. Dwayne and his best friend Travis (Swardson) decide to hire a hitman to bump off The Major, in order to inherit his lottery millions. But hang on, there’s a catch: they need a hundred grand to pay for the hit. They could rob a bank, but they don’t actually want to. That’s where inspiration strikes: they could force someone else to rob a bank for them by strapping a timed bomb to their chest. Enter Nick, the inevitable victim of the insane plot. While there are some plodding scenes involving a lot of “Shit man, what do I do?” moments, it is a stumbling block the movie manages to get over. As Nick’s terror gathers and eventually succumbs to a full-fledged adrenalin rush, 30 Minutes or Less evolves from a third-rate slacker comedy to a very likeable action film. While Eisenberg and Ansari begin the film as squabbling infants (“You’re a f*cking man child! You had a Lunchable for dinner last night!”), their bank heist transforms them into heroes worth rooting for. The dialogue becomes progressively stronger as the action grows more heated, leading to a movie that manages to successfully balance its thrills alongside its comedic frills.

Although admittedly the premise is farcical, for the majority of the time it treads gracefully between outlandish and somewhat believable. As Nick and Chet decide their getaway vehicle should be the car they used to wash for an elderly neighbour, you can’t help but think “Yeah, if I was going to rob a bank, this is probably how it’d go down.” While McBride is serviceable as Nick’s maniacal terrorizer, his character consists of the archetypal McBride schtick we’ve seen in Your Highness, The Foot Fist Way and Eastbound & Down. He’s cruel, disgusting, ignorant, and a basic facsimile for McBride’s abilities as an actor. Once again, it’s a trick that is destined to get old quickly, and will probably relegate him to the Jack Black realm of “I Can’t Believe We Once Found This Funny”. Perhaps it’s better he stay there.

Overall, 30 Seconds or Less is a nice bit of mid-week escapism, elevated from 2 stars to a healthy 3.5 owing to its comedic timing and well-constructed action. While the writing and characterisation is clunky at times, the film is sharply executed by Zombieland director Ruben Fleischer. Packed with car chases, knife fights, and a big flamethrower, it’s all good fun, but perhaps more of a rental then a cinema trip.

Previous: Coronet Cinema Listings 23rd-29th September
Next: The Top 20 Films We Want Back On The Big Screen 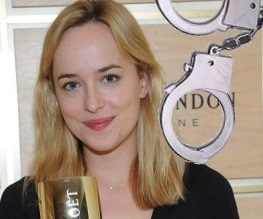