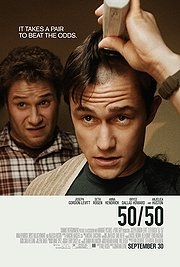 Twenty-seven year old Adam (Joseph Gordon-Levitt) might not admit it, but he’s got a right to be smug. He works at a radio station, his impossibly hot girlfriend spends her time either getting undressed, dressed or painting him lovely artistic things he doesn’t quite get, he’s young, he looks remarkably like Joseph Gordon-Levitt and his best friend Kyle (Seth Rogen) keeps him in lolz and lifts. The problem is, he also has cancer. Staring blankly at the doctor giving the news after a routine check, his first thought is that surely, they’ve gotten it wrong. “No, no”, he says, grinning, “I… I don’t smoke, I don’t drink… I recycle…” The doctor stares back at him with both sympathy and impatience; being attractive and well-dressed is all very well, but it doesn’t mean much when you’ve got a 50% chance of survival.

Lumbered with a disease he can’t even pronounce (“uh oh,” frowns a fellow patient, “the more syllables it has, the worse it is”), a girlfriend who’s almost-half determined to See Him Through This and slightly-more-than-half determined to open her own art show, and a best friend who’s sure that Having Cancer is the new aphrodisiac; at least Adam can find a bit of solace in his weekly therapy sessions. Except his therapist is 24. And he is her third patient, ever. Never pushing for laughs and never ladling on the sentiment, 50/50 is instead a painfully honest account of how we go about living when life is no longer a certainty. Letting the dialogue unfold in a largely improvised style, director Jonathan Levine allows every exchange to feel natural, leaving space for the cast to find the comedy in each scene without ever forcing humour upon it. It has to be said that Seth Rogen is absolutely perfect in his role of – for want of a better phrase – Pithy Humour Injector; his trademark quick wit working marvellously against Gordon-Levitt’s natural likeability. The two of them traverse the potential pit-falls of dark humour and saccharine subject-matter effortlessly, ever aware of the needs of the scene and their audience. Kudos also has to go to the lovely Anna Kendrick for an equally confident performance as Katherine, the naive but determined therapist who gradually – and despite her most professional of intentions – finds herself drawn further and further into Adam’s rapidly unravelling life. As we and the surrounding characters wait for Adam’s fate to be decided and the tone grows ever more serious 50/50 never loses its spark. Whether Adam is bemusedly getting high whilst being treated with chemotherapy, getting a pre-emptive haircut with Kyle’s questionable body-hair shaver or simply, suddenly, letting the awful, bare fear of it all peek in, 50/50 is painfully aware that moments of poignancy are most effective when they surprise us. The cast, the writing and the direction all pull together to ensure that even the most traumatic scenarios are dealt with humour, honesty and bravery, so that when moments of tragedy hit – and they do – they cannot fail to get us between the eyes. Above all and no matter what your own experience, 50/50 is a film that deserves your attention. A deceptively simple, brilliantly-told story about the small things that make up the big picture, it’s confident enough in its characters that it never needs to trumpet something as patronising as A Message, A Lesson or even, really, a point. Life, death and everything in between, as we all invariably discover and as 50/50 seems to shrug, is far too wonderfully complex to be as tidy as that. 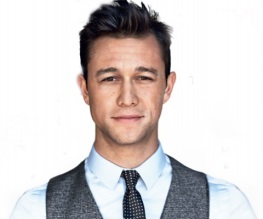