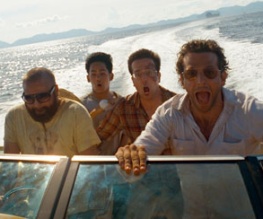 Blimey, Warner Bros. The legal world has barely recovered from the ridiculous court battle between you and the tattooist who quite rightly accused you of nicking the horrible yobbish drawing he did on Mike Tyson’s face and sticking it on Ed Helms in The Hangover: Part II. Couldn’t you have given it a rest for a while?

The answer: apparently not. Yakko, Wakko and Dot are being sued over another alleged Hangover-related copyright infringement – this time the litigant is aspiring screenwriter Michael Alan Rubin, who’s thrown his dignity to the winds in order to claim that The Hangover: Part II is based on his unpublished screenplay Mickey and Kirin. His unpublished, autobiographical screenplay. Oh dear me.

Previous: Aaron Eckhart signs on for Dennis Wilson biopic The Drummer
Next: 50/50