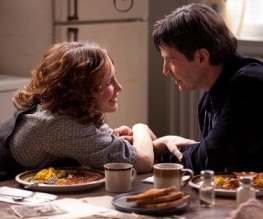 Henry (Reeves) is in a rut. His life meanders from one dull occurrence to another, until an awkward conversation about babies with his girlfriend is interrupted by an old acquaintance needing a lift to a softball game. Lo and behold, this lift turns Henry into an accomplice to a bank robbery and he ends up in prison. So upon his release he logically decides to rob the bank he was accused of robbing, using plans for a secret tunnel found in the toilets. Which is where all good criminals find their inspiration.

Once inside, Henry meets Max (Caan) a lifelong con who has no interest in being released- jail being so homely and nice. The two strike up an unlikely friendship that continues after Henry is granted parole. Now single and at a dead end, Henry persuades Max to give up his life long dream of living in prison, and come back out into the big bad world to help him rob a bank. That’s one way to get out of a rut!

The bank is conveniently next to a theatre, which is due to stage The Cherry Orchard. This gives Henry the chance to strike up a relationship with Julie (Farmiga) the star of the show. From here the film descends to even more ludicrous levels, as the love affair between Julie and Henry is played out against the backdrop of Chekov and the robbery. While Max digs a tunnel from the theatre to the bank, Henry gains access to the necessary dressing room by auditioning for the play. Told you it was ludicrous. But surprisingly, here begins the most enjoyable part of the film, as Reeves as Lopahin (the character in The Cherry Orchard for people with no drama degree) is a whole lot better than Reeves as Henry. Don’t ask me why- but when pretending to be an actor, we discover a little known fact: Reeves is not made of wood! Miracles abound, the man can act!

Unfortunately, this cannot make up for the fact that the majority of the film revolves around the character of Henry, a guy so dull he could make you fall asleep just by looking at him. Which is a shame, as with different casting this film could have worked. As it is, the cast of supporting characters almost save the film. Max and Julie are wonderfully crass in their approaches to everyday life, and both embrace Henry in the way you would an orphaned sick puppy. Throughout the film, you get the impression they are humouring him and his dream of robbing the bank, out of pity and a sick desire to see if he can pull it off. Therefore, it comes as a shock when we realise Julie actually cares for Henry, but a welcome one, giving Farmiga the chance to show off her impressive acting. Which did not rub off on her co-star.

All in all, an interesting take on robbery, but with a few too many flaws (the ability to run with a shot leg for example) to be anywhere near excellent. Henry’s Crime would have been better served if it had decided at the outset whether it wanted to be a drama, rom-com, comedy or indie flick. As it is, in trying to be everything, Henry’s Crime manages to be nothing more than a midlife crisis wrapped up in robber’s clothing.

Previous: Short Film of the Week – The Commuter
Next: Future of 3D films