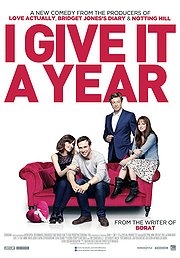 Though films may not always show it, anybody that’s been in a long term relationship would admit that all couple have their niggles. Spend your lives sharing a home and it’s only natural that you’ll find something to get annoyed about from time to time. What makes people stay together isn’t necessarily perfection, it’s how much the good outweighs the bad, and it’s only when the balance tilts the other way that love begins to turn to regret. 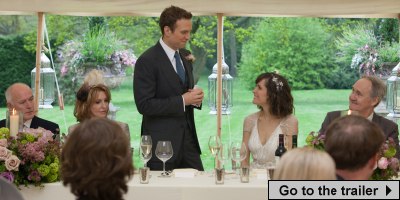 I Give It a Year is a story of a couple drifting toward the latter camp. Recently married after a whirlwind romance, blocked novelist Josh (Spall) and PR executive Nat (Byrne) are fast becoming jaded with their decision. Ambitious and ever busy, the unnecessarily shrewish Nat resents Josh for crimes as heinous as forgetting to put toilet roll on the holder and asking “Is it cold out? Do I need a coat?” as they prepare to leave the house. Josh meanwhile, despite being billed as the more laidback of the pair, is not to be outdone in the irrational anger stakes, at one point chastising his wife for having the gall to sing along to songs when she doesn’t know the words. “It’s idiotic”, he says. Aw shucks, can’t these two affable lovebirds just get along?

Yet as their connection to each other fades, their attraction to those around them begins to grow, with Nat soon finding herself drawn to handsome and wealthy American client, Guy (Baker), and Josh seeking comfort from his charity worker ex-girlfriend, Chloe (Faris). See how different they are?! As Guy turns on the charm and Chloe somehow endears herself to Josh by bemoaning such hardships as not being able to afford her own flat after years of non-profit work in Africa (what unexpected horror!), Nat and Josh begin to wonder whether they took the plunge too soon. It’s a reasonable doubt to have; with the entirety of their seven month courtship only represented silently during the opening credits, the audience certainly has no idea why they’re together. Rest assured, by the end of the story they both seem like horrible people. 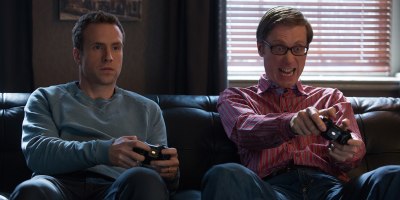 To director Dan Mazer, this is apparently both romantic and funny, but in reality it only illustrates the film’s central problem. Reeling against the convention of Richard Curtis one minute, but embracing it the next, I Give It a Year is a tonal mess where even the rare highlights outstay their welcome. Whether it’s Tim Key’s appearance as a solicitor drawing-up the couple’s joint will (a promising premise tainted by one too many off-colour jokes), or Olivia Colman’s performance as an unhelpful marriage counsellor (turns out she argues with her own husband, chortle), there’s a persistent feeling that script is trying just a little bit too hard. Minnie Driver and Jason Flemyng are an argumentative couple who love each other really? Fine, but dial it down. Stephen Merchant is the boorish best friend? Okay, but he needs some likeable qualities, otherwise nobody would have him as friend in the first place.

With neither consistent laughs, nor the emotional realism to anchor them, I Give It a Year doesn’t feel like a love affair, it feels like a chore. Simply put: if Blue Valentine had featured a pair of shallow and dislikeable ciphers as protagonists, would it have become a comedy smash? No, it would simply have become annoying.