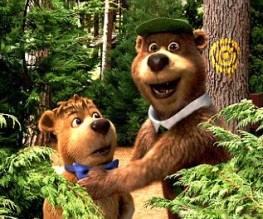 The story of Yogi Bear, the jaunty mammal with a penchant for accessories (but no clothes) was first conceived back in 1958. Despite being unknown to kids nowadays, busy as they are with their Gameboys and knives, director Eric Brevig has attempted to bring the bear back to life, mostly by chucking some modern technology at it and luring Justin Timberlake in, like a fox to egg noodles, to voice sidekick Boo Boo.

Yogi (Dan Ackroyd) and Boo Boo (Timberlake) must curb their instinct for mischief as Park Ranger Smith (Cavanagh) tries to save Jellystone National Park from being demolished. Their hope of saving Jellystone from the depressingly urban-minded Mayor lies not in their inherent value as FREAKIN TALKING BEARS, but a boring old frog-mouthed turtle. And fireworks, because Americans like things that are glittery.

Yogi Bear’s main reason in life seems to be stealing picnic, or in his words, pic-a-nic, baskets with the dangerous looking ‘Picnic Snatcher 2000.’ Understandably, people are a little weirded out by massive talking bears stealing their food, and park visits are at an all-time low.

Dan Ackroyd’s voicing of the rhyming bear may have been reasonable in the past, but conveyor belts of standard american voices in cartoons (a.k.a Aladdin being voiced by someone from New Jersey) means that audiences are used to a certain sound. Yogi has such a stately, deep, and unctuous turn of phrase that he sounds like a 1950’s paedophile. However, I did not realize that Boo Boo was Justin Timberlake until I went on IMDB, which bears testament of his ability to, erm, do a nasal whine really well.

In terms of human performance, Anna Faris is afflicted with what can only be described as plastic-face, rendering her performance as a wildlife film maker pretty unbelievable. In comparison, Tom Cavanagh’s turn as weary Ranger Smith is excellent, although one wonders if a lot of acting was needed – it can’t have been much fun to be in a film where the only company are fake bears and Anna Faris. Something that continually crops up whilst watching Yogi 3D is who exactly this movie is for. There are no sly references for the adults as there are in Megamind or How to Train Your Dragon, and the overall pace of the movie didn’t seem to appeal to the young audience, judging by the reactions around me.

Moments for the kids, for example when Yogi Bear and Boo Boo do a sexy dance to Sir Mix-a-lot’s ‘Baby Got Back,’ were just really strange. Call me old-fashioned, but bears grinding to an ode to big arses seems as unnatural as me likening Dan Ackroyd’s voice to a paedophile’s.

The one redeeming feature of Yogi Bear is its environmentalism. You’ve got to love a huge film studio that will deign to make a morality tale which centres around not cutting down trees, a pertinent topic when every strip of grass in America is a blueprint for another mall. So yay for not cutting down trees! Especially if there’s a frog mouthed turtle in one of them. 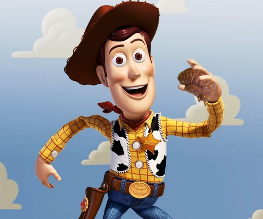 How we all learnt to love cartoons