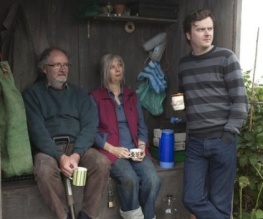 Mike Leigh’s reputation as one of England’s foremost directors is well-founded. There is quite simply nobody else who makes such deliciously English films, replete with understated emotion and meticulously crafted dialogue. And rain, of course. It’s little wonder that his work travels so well – the man is basically a hairy extension of the Tourist Board, if Tourist Boards are actually a thing and I haven’t just made them up. They probably do exist, and Mike Leigh is definitely what one would be like if it came from Salford and couldn’t get enough of Imelda Staunton. His latest film Another Year is due out in November 2010, but I caught up with it – and some of the cast – at the London Film Festival. It is matchless as a showcase for the extraordinary potential of Leigh’s unique style, but I couldn’t help being… well, bored.

Tom (Broadbent) and Gerri (Sheen) are a couple in their sixties whose warm and welcoming house acts as a refuge for their various messed-up friends. Their most frequent visitor is Gerri’s colleague Mary (Manville), a fifty-ish divorcee who can’t cope with getting her garden in order, let alone form a functional relationship with a human being. Then there’s Ken (Peter Wight), a spectacularly obese council worker who divides his time equally between eating, drinking, eating, whingeing, eating and lusting after Mary. They also see a lot of their son Joe (Oliver Maltman), who is slightly more dutiful than necessary as compensation for his persistent failure to bring home a nice girl.

Another Year, as you might expect, follows Tom and Gerri for a year of their gently boring lives. They are entirely static figures, a slightly over-couply rock of solidarity immune to the waves of frothing anguish and underachievement breaking around them. This is simultaneously the greatest pleasure of Another Year and the tipping point for its collapse into pointlessness. Tom and Gerri are both an absolute pleasure to watch, and their fully rounded characterisation is so expert that at times the film feels more like a documentary than a fiction. This is doubtless thanks to Mike Leigh’s unique way of developing a film, in which scripts are not used and the actors are instead encouraged to ad-lib their dialogue over a period of weeks whilst in character.
However, the eminently believable characters which Jim Broadbent and Ruth Sheen honed over an eight-month period (Another Year was shot in thirteen weeks after five months of intense preparation) are such realistic pensioners that they are SPECTACULARLY BORING. Another Year does its job far, far too well – unless it’s being livened up by a visitor, Tom and Gerri’s house is just somewhere they can sit and wait to die when they’re not up the allotment.

It’s not even as if I can rely on saying that it’s a bleak film – which it is – or that it demonstrates the British inability to deal with loneliness or less – which it does. These excuses would justify Another Year if it wasn’t funny (and it is, sometimes – Tom is deliciously sardonic and Mary cringeworthily mental), but they do not and cannot exonerate its essential plotlessness. At the beginning of the film, Tom and Gerri are smug, Mary and Ken are a mess and Joe is single. Nearly two hours later, the only thing that’s changed is that somewhere around the 55-minute mark Joe literally produces a girlfriend from behind a door. No, literally. Literally from behind a door. Another Year is an opportunity to see some of Britain’s most underrated actors doing what they do best, and as an academic study of the nature of film I’m sure it’s very useful. But as Mike Leigh took pains to point out after the BFI screening, the acid test of any film is the audience reaction. Unfortunately, watching Another Year is about as entertaining as sitting in the living room of someone else’s grandparents whilst they slowly – very, very slowly – shit themselves. Two and a half stars for the actors, half a star for the plot.