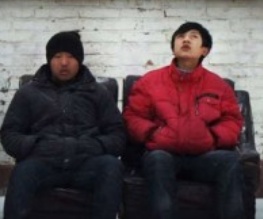 Remember school holidays? How they stretched in front of you, endless, desolate, with the same pressing hopelessness that drowned all the exchanges of your teenage years? Remember the slow, simmering hate at the world and the creeping feeling that everything definitely wasn’t fair, you just weren’t sure how? Chinese director Li Hogqi has made it his mission to distil those long buried feelings into 90 minutes of painful dark comedy, as we follow the final few days of winter vacation in small town China. It’s certainly accurate. It’s certainly universal. But entertaining? This is where it gets tricky. When so very used to watching Western block-busting thrash-blinders, its sometimes difficult to acclimatise oneself to the often slower, calmer pace of an Eastern release. Never has this been more apparent to me then whilst watching Winter Vacation. Not so much following as occasionally dropping in on various characters, its a film that spends more time on static shots of landscape, silent meanderings and repeated image motifs then on anything resembling story. It’s slow. My God it’s slow. I mean, that’s the point, but still. It doesn’t make it any less painful. We glimpse the trials of a group of young male teens (one has a girlfriend, one has a bully, they all have fairly large coats), as they silently wait for their winter holidays to be over. They walk through their little town, they say very little, any questions that get asked are left unanswered. We occasionally cut to a young boy stuck in a room with his granddad, whose only ambition is “to be an orphan”. One woman buys a cabbage. It takes 10 minutes. Scenes are repeated with slight differences, the changes only highlighting the continuing hopelessness, and everyone looks defeated. It’s face clenchingly difficult watching. And yet. And yet. Somehow, there’s something amazing about how this film changes you as a viewer. In the first hour, the Hollywood-er inside you rages, thumps, stamps around growling “something explode! Someone have sex! Where are the zombies? COME ON COME ON!”, until you feel you can take no more. And then gradually, as your point of reference changes, the constant nothingness starts to beat down your impatience and dull your hunger. You begin to feel like layers of skin are being filed away, and gradually you become sensitive to what you’re watching in a way you weren’t at the start of the film. With very few other options, you begin to appreciate the action within the inaction; with nothing else to look at, you notice every eye movement, every flick of a finger, every gentle bodily sway. The lack of action becomes strangely hypnotic, it dulls your desire for change, sends you insular and eventually you come to appreciate this strange, beautiful paralysis. Unwillingly, you too become stuck in the limbo all the characters inhabit; unable to move, resentful of its endless stillness and yet comforted by its familiarity. When school finally begins, we think, this spell will break. Won’t it?

Winter Vacation is one of the strangest, most frustrating and ultimately emotive films I have ever come across. I wouldn’t – couldn’t – recommend it as a piece of entertainment. But as an account of the unglamourous hardships of not only teenhood, but life in general, it is undeniably affecting. Questioning not only our shared paralysis, but how film should be used to convey it, it’s almost a must-see. If you can sit through it.

Previous: Supernatural Season 5
Next: Another Year