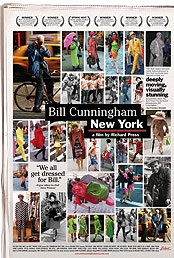 The idea of seeing a documentary about a fashion photographer immediately made me apprehensive. I was anticipating interviews with various self-obsessed ‘movers and shakers’ of the fashion world, using unnecessarily big words to describe why it’s important for guys to wear make-up, or how the latest couture fashion can help alleviate the global financial crisis. While there are a few such characters in this documentary, Cunningham himself is incredibly removed from this world; a man who’s clearly in it for the pure love of clothing and fashion, without all the celebrity bullshit attached to it. At the same time, his incredible passion towards his work hides a hard-to-place sadness to his character, which makes this documentary more a poignant essay on loneliness rather than a mere biography of a famous fashion photographer. The film has an elliptical tangent, which seems fitting for a guy whose whole life revolves uncompromisingly around photography – or more specifically the search for beauty. Right from the start, Cunningham cuts a strange, hermit-like figure as he stands around the sidewalks of New York, snapping pictures of people that stand out in the crowd, and donning a blue French bin-man’s jacket (bought for $20, and worn for the practical reason that it contains ‘a lot of pockets’). From this beginning, we assume that he can only normalise as a character, but, amazingly, he only gets weirder and more fascinating as the film goes on.

The respect with which Cunningham is treated in the fashion world is well covered by first-time director Richard Press. Various socialites, models, designers and transvestites speak with admiration and love for Cunningham, but all of them confess to having no idea about his personal life. When the filmmakers are invited into his home in Carnegie Hall (a former stronghold of New York bohemia), they’re faced with a small apartment crowded with nothing but filing cabinets containing all the photos taken throughout Cunningham’s career. Oh, and a mattress that’s propped up to bed height by magazines. The only thing that distracts us from this bizarre sight is meeting his equally eccentric neighbour, Editta Sherman; a faded former muse of Andy Warhol’s whose grandiloquence contrasts comically with Cunningham’s humility. Press’ camera meticulously observes every reaction on Cunningham’s face. Most of the time it’s a child-like joy as he snaps the most extravagantly dressed people in New York and Paris, but when the questions get more intimate – asking about his personal life, relationships and churchgoing on Sundays – we hit an emotional wall. For much of the film, we grow to believe that maybe Bill’s incredible passion for his work nullifies the possibility of loneliness. Yet Press’ gentle but revealing probing suggests there is a price to pay for such a dedicated pursuit of a single passion; a certain sadness – maybe even regret – that he never gave himself a shot at other things in life.

Press does a great job in giving a strong profile of Cunningham, throwing in some interesting archive footage to enhance key moments; footage of Cunningham in his earlier years emphasises what an unchanging character he is, while Warhol’s video of Editta Sherman dancing captures the spirit of 60s bohemia brilliantly. For the most part though, it is Cunningham who provides the heart of the documentary. We’re treated to his vast collection of photos, which vividly capture the changing face of fashion over the past 50 years, and there is something warming about watching this crazy old man be as immersed as ever in his one and only passion in life. Who cares if it’s something as relatively trivial as fashion photography? This is a film not only about a photographer who happens to be the nicest guy in the world, but also about the sacrificial nature of passion. That being said, if everyone took on Cunningham’s pure approach to fashion, then the world would surely be a better, bizarrely dressed place.

Previous: Orange (Wednesday)s And Lemons #61
Next: Grint and Moretz join The Drummer