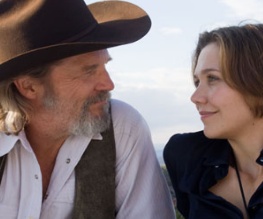 There are several reasons why helping to produce a movie you’re also starring in is a pretty sweet deal. Jeff Bridges shows this off to perfection in Crazy Heart, as he manages to swing a bed-time scene with Maggie Gyllenhall, despite the fact he’s about twelvety times as old as her. The magic of cinema, eh? To be fair, Jeff’s great performance means he can get away with just about anything, in a film that he just about saves from being schmaltzy.

That Rock And Roll Lifestyle

Fifty-seven years-old and still touring rundown motels and bowling alleys, country and western singer Bad Blake (Bridges) is a shadow of his former self. Constantly inebriated and liable to throw up in the middle of a gig, he plays bleary-eyed to his loyal fans. Before one performance, newspaper reporter Jean Craddock (Gyllenhaal) interviews Bad and catches his eye, sparking an unlikely romance. However, Jean is extremely wary of the sozzled celebrity: she has a young son (Jack Nation) to protect and she cannot let men gatecrash her life. Bad gets under her skin and she opens her heart to the possibility of love but she must compete with his love for Jack Daniels and the allure of a potential comeback with former protege, Tommy Sweet (Colin Farrell)

The success of this film was always going to hang entirely on the strength of the central performance, and we have to say, Jeff is the man for the job. His face is quite amazing, capable of showing a plethora of emotions with simply a raise of his knowing eyebrows, or the tightening of his country jaw. The story itself is pretty simple -much more character based than action based – and it’s entirely up to Bad Blake to hold our attention throughout the piece. Bridges does this effortlessly, moving from charming cowboy, to drunken lout, to a broken man with breathtaking ease. He is matched scene for scene by Maggie Gyllenhall; although she doesn’t command the screen in the way that Jeff does, her subtle and understated performance compliments Bridge’s fallen star to perfection, and the tension between them is palpable from the very first scene.

A Tune We Can Dance To

The story is, admittedly, a little cheesy and relatively simple – the tale of a man’s journey from the top of the pack to the bottom, and back up again. The soundtrack is gentle and crooning, adding to the soft and sometimes shmaltzy atmosphere created by director Scott Cooper. But the magic of Bridge’s performance saves the film from cliche, and you can’t help but watch in wonder as he tells us his story. It’s looking more and more like the Oscar race for Best Actor will be between Jeff Bridges and Colin Firth, and after Crazy Heart, we’re not sure who deserves it more.

Did you find Jeff’s performance toe-tappingly good, or did the music jar with you? Let us know below!