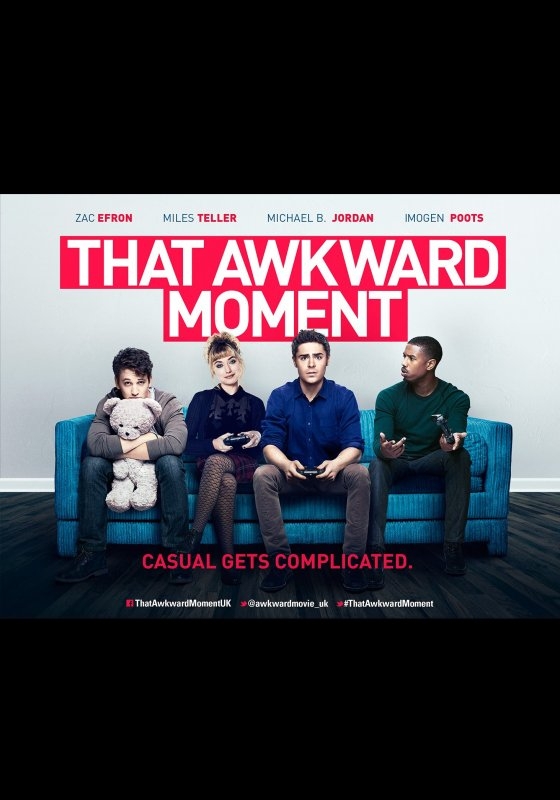 When his wife asks for a divorce, Mikey (Michael B. Jordan) turns to best friends Jason (Zac Efron) and Daniel (Miles Teller) for support. They vow to remain single as a sign of solidarity, and to help Mikey get over Vera (Jessica Lucas) by setting him up with a few one night stands at their local haunt. No sooner have they made their pact, however, do both Jason and Daniel begin to fall in love, the former with colleague Ellie (Imogen Poots) and the latter with wing-woman Chelsea (Mackenzie Davis). This is unprecedented for both of them, as they have until this point ended each and every fling the moment it threatened to get serious, at a junction characterised by Jason as “The So”.

You’ve got to question the reputability of the so-called Black List, a survey published every year compiling the best unproduced scripts currently circulating in Hollywood. First it gave us Stoker, a vampire story by Wentworth Miller notable only for its conspicuous lack of vampires (though it did have plenty of scenes dedicated to shoes and ice cream), and now it serves up That Awkward Moment, a romantic comedy that is neither romantic or funny (or even awkward). In fact, Tom Gormican’s screenplay — and by extension the film he has directed from it — is so witless it’s not even laughable.

It’s quite the accomplishment, actually, as just about every principle cast member who isn’t Miles Teller has an innate charm that (usually) makes them a winning lead. Efron has always been good value for money, whether singing and dancing in High School Musical, pretending to be a young Matthew Perry in 17 Again or spouting cod-philosophy in Liberal Arts, but here he verges on hateful as a sleazy book cover designer who thinks the five-a-day rule applies to vaginas, not vegetables. Poots too is wasted, her once infectious smile instead looking sad and lost. That said, next to Teller — whose preferred persona seems to be that of a soulless Vince Vaughn — they’re still positively delightful.

The main problem is that nobody has any real conviction. The film opens with Efron’s character sitting on a park bench, threatening a flashback that you’ve already lost interest in. The characters aren’t just lacking in charm but credibility too; Jordan doesn’t look old enough to be cooking his own Thanksgiving turkey, let alone working as a qualified doctor, while Efron and Teller are completely unconvincing as evolved men, let alone ‘book cover designers’ — jobs that seem to have been invented solely for the purposes of this film. As for the humour, what appears to be the film’s sole gag — involving a discussion of whether or not Daniel did a shit in Justin’s toilet — isn’t funny the first time, and becomes even less so the more the filmmakers attempt to run with it.

That Awkward Moment is a disaster. Even with the bar for comedies set as low as it is, thanks largely to the careers of both Adam Sandler and Zack Galifianakis, Gormican’s film is particularly unimpressive. That Awkward Moment is predictable, puerile and pathetic, and like the silences that are said to follow The So it seems to go on for ever.