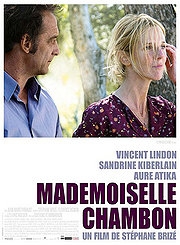 Mademoiselle Chambon is based on the novel by Éric Holder and won Best Adapted Screenplay at the 2010 César Awards, yet is a wonderfully crafted film in its own right. Director Stéphane Brizé is skilled at creating a beautiful aesthetic that gently carries the story of Jean (Lindon) and Mademoiselle Chambon (Kiberlain) in original ways.

The plot of the film is simple; Jean, a married bricklayer, seems happy with his life at work and home with the film opening on a humorous scene at a family picnic. But one day he picks up his son Jérémy from school and meets new teacher Mademoiselle Chambon, and the pair become fascinated by each other. Throughout the film he is tied to a family and a home but doesn’t want to be, and Mlle Chambont is the opposite as she moves from city to city with no real emotional bonds. Throughout their affair, the film delicately portrays the characters’ emotions as they fall in love and are soon forced to make some tough decisions. As a classic love story, Mademoiselle Chambon does not offer a huge amount of action in terms of plot. Clearly a lot of Brizé’s attention has been focused on the smaller details of this film and as a result, he makes a success of packing plenty of emotion into scenes that, on the surface, are not necessarily very exciting or provocative. Unusually, much of this has been achieved through visual references as dialogue is kept to a minimum, where in many scenes – such as their first kiss – a word is barely spoken yet a range of complex emotions is perfectly spelled out. Much of the film’s action lays beneath the surface and for that reason, many of the characters are left guessing at what is being felt or thought – the downside of this is that the pacing can sometimes feel slow. Often the film plays with the silent tension that is a result of the characters’ interaction, and the success of this approach is largely owed to exceptional performances from Lindon and Kiberlain, who capture the awkwardness, desire, and sadness inherent in the story. Their physical appearances offset their opposing characteristics – where Jean is large, dark, and rough, Mlle Chambon is blonde, thin, and delicate, yet there is something also complementary about this mismatch. Off screen their relationship is complicated – they are a married couple who have separated, yet this seems to only provide more power behind their on-screen chemistry.

Jean’s character is certainly the most fascinating of the film – he is romantic without meaning to be, and charming when he isn’t trying. At first he seems troubled by this new woman, yet as the film unfolds him emotions towards her become clear and he embarks on a personal self-discovery to the point of almost becoming a different man. This journey is one that adds a new dimension to the love story as the characterisation of Jean, his wife Anne Marie, and Mlle Chambon is orginal and refreshing. Overall, Mademoiselle Chambon is a very interesting film in which both the acting and direction are very well thought-out. Clearly Stéphane Brizé has a talent for getting the most of his characters, even if they are not saying a word, adding to the film’s trust in the power of the visual image. It is subtle, with lots of hidden ideas that are captured among a very simple storyline, and this is the reason why many would take great pleasure from the film, but also the reason why some might feel quite the opposite.

Want to let us know what you thought? Comment below!