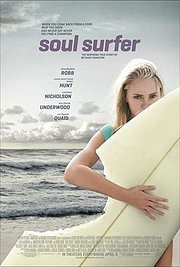 Soul Surfer is based on the true story of Bethany Hamilton, a 13 year old competitive surfer with big dreams. She’s pretty, blonde and overwhelmingly talented with a board, taking to the waves so easily that her parents fondly think of her as a mermaid with legs. The sea is her life; if you don’t believe me, just count the moments where she gazes out at the ocean with a big smile on her face. In fact, her sole aim in life is to enter the surfing regionals so, when RipCurl decides to sponsor her, she pumps up her training regime to the max. And then the unthinkable happens. A sudden and vicious shark attack takes her left arm, sixty percent of her blood and all hope of her ever surfing again. I spent the first thirty minutes of this film in an overwhelming state of extreme tension; inevitable shark attacks are just sickening, aren’t they? The director obviously expected this from his audience and so plays up to the omnipresent shark, treating us to long lingering shots of legs underwater, lines loaded with innuendo and obligatory suspense music. NOW IS THE TIME FOR SHARK! I would think, as Bethany said something about feeling complete (hah!) before realising that this was another red herring. No shark. No shark ever. When the attack finally came, I found myself feeling relieved. That’s right; I was RELIEVED when AnnaSophia received a sub-marine mauling. Now I could get back to watching this thin and frothy biopic without the knot of dread in my stomach. She takes the incident in an unnervingly saintly manner, nodding benignly when she discovers her arm is no longer there. Thank goodness she has her parents on hand to unleash all emotional hell on her behalf. And, by parents, I obviously mean a gulping and tearful Helen Hunt and faux-Ford Dennis Quaid, both of whom are apparently surfers too. Well, so the CGI heavy shots of them cruising the waves would have us believe anyway.

Hagiography and Christian faith leap into the surf almost immediately after the titles have ended, with Bethany rushing from the sea to a church of singing and clapping religious folks. Faith is all very well and good. We totally get that Bethany’s belief in the Lord was crucial in her finding the inner strength to overcome her involuntary amputation, yet the constant references to harmony and “God’s plan” get more than a little tedious after a while. The sugary and frothy dialogue drag the story down into the depths of “straight-to-TV movie”, turning a gritty story of self-belief into one about miracles and cheesy wisdom.

“Life is like surfing. When you get caught in the impact zone, you have to get right back up…” Surfing fans will be disappointed to find that almost every surfing scene was filmed using CGI; please pay particular attention to the “light at the end of the tunnel” metaphor redone with a dream barrel sequence. Shudder. However, despite all of this rubbish going on around her, Robb came across as a talented actress and a definite star in the making. Poignant, refreshing and subtle, she never gives too much away and managed to drag me into the sentimental finale.

Bethany Hamilton was an inspiration and this film failed to do justice to her courageous struggle. However, as a fun and mindless frolic through the water baby genre, it kept me entertained. At the very least, it gives cinema goers the unlikely film fusion of Jaws meets Pollyanna and, let’s face it, who ever dreamed that was possible?