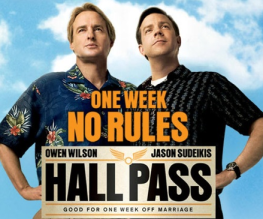 The wives of two sex-obsessed men get so fed up with their husbands leering at other women that they give them a hall pass – a week off marriage to do whatever (or whoever) they want, in the hope the fellas will discover they aren’t that good at chasing tail. ‘Hilarious’ set-pieces ensue as Rick (Wilson) and Fred (Sudeikis) try to make the most of their seven days of freedom, while wives Maggie and Grace have some fun of their own.

I went into this film with the lowest expectations possible (short of Keanu Reeves performing Shakespeare), so it was a surprise when parts of the film actually managed to live down to this apprehension.However, I’ll start with the good bit, which is that Wilson’s character is surprisingly likeable. Ignoring for a moment the fact that he checks out women like they’re on the bargain rack, he adores his children and loves his wife and although he is essentially a boy in man’s clothing (what a change from his other roles), the really puerile mannerisms are saved for his co-star Sudeikis’ character. Fred is married to Grace (Applegate) in an example of the bewildering match-making evident in films like Couple’s Retreat, as despite the fact that Fred’s decidedly plain mug is unadorned by charm, wit or entrepreneurial genius, he’s somehow married to a woman so far out of his league that he should get vertigo just looking at her.

The film has a couple of the necessary laugh-out-loud moments but the rest is just dull or only watchable through your fingers, with particular low points being when a girl ‘sharts’ in a bathtub and Fred describes his ‘fake-chow’ technique. Please, please, don’t ask me to explain either of those terms. Throw in a ‘we’ve taken too much pot’ scene and a couple of try-hard sex gags and you’ve pretty much got the flavour of the humour. The problem is that the comedy mostly feels tired; either even a short-sighted mole could see what is coming or the jokes are recycled material, especially the good ol’ gender stereotyping. Grace at one point expresses shock that Maggie has never used the ‘pretending to be asleep to get out of sex’ ruse. “But it’s just a fact that between 10pm and 6am women fake everything,” she tells her friend. Women don’t like sex? How original – please stop me from choking on my own hysterical laughter. It is for this reason that it is so discouraging to see Stephen Merchant starring in the film. As one of the brains behind a show that many people say reinvented comedy, it is particularly depressing to see The Office’s co-creator involved with such offensively bland work; and as a token Englishman whose constant punchline seems to be his accent and his habit of wearing blazers everywhere (at least he’s better dressed than every other male character). It is also pitiful because the Farrelly Brothers managed to make some decent, original comedy in their day (remember There’s Something About Mary?) but they seem to have sunk into a festering cesspit of mediocrity without a iota of the ambition needed to crawl out. If they could wipe clean the blackboard and start again they might be able to reclaim some of their former charm. But I for one am not going to hold my breath. http://credit-n.ru/offers-zaim/denga-zaimy-nalichnimi.html http://credit-n.ru/kreditnye-karty.html