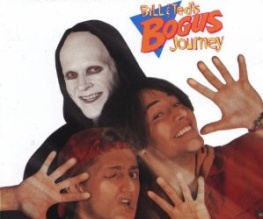 Bill and Ted’s Excellent Adventure, the quintessential late-80s stoner comedy, was always going to be a hard act to follow. Happily, its 1991 sequel Bill and Ted’s Bogus Journey (originally Bill and Ted Go To Hell) is an appropriately fun and ridiculous sequel to the time-bending original – it’s not clever or particularly witty, but its relentless crudity and silliness manage to build up to a critical mass of guilty giggles and deliciously dated nonsense.

Two years after acing their history project, Bill S. Preston Esq and Ted ‘Theodore’ Logan are in something of a rut. Stuck in dead end jobs, they can barely pay for their apartment and certainly can’t afford to buy their 15th century princess girlfriends proper engagement rings, but at least they’ve got the band. Right? Wrong – just as Wyld Stallyns is about to play its biggest gig ever (live on Channel 12!), evil robot versions of Bill and Ted are sent from the future to kill them, take their places and run their lives into the ground. Yeah, that old chestnut. Accompanied by a reluctant Grim Reaper (William Sadler), Bill and Ted rampage through the astral plane in search of a way back to their simple life of amps, babes and pizza – but in between possessing Bill’s dad, pissing off the Devil and mugging an angel, will they make it back in time for Battle of the Bands? Whoaaaaaaaa!

Bogus Journey manages to avoid having any plot at all beyond the most basic good guys/bad guys dynamic, and its frantic rushing through every supernatural phenomenon the writers could come up with is more than a little confused. It’s not as well-written or as funny as Excellent Adventure, and George Carlin’s most excellent Rufus barely makes an appearance. On paper, it’s dreadful. But I loved it. The duo’s more varied adventures gave rise to some fabulous set-pieces and homages to other films – look out for the A Matter of Life and Death-inspired staircase in Heaven and Death’s Seventh Seal-esque game of Battleships for Bill and Ted’s souls – and there were still some classic lines tucked amongst the insanity. How often do you hear Keanu Reeves (as Evil Robot Ted) confess to having a “full on robot chubby”? I nearly weed myself.

Edifying it ain’t. But if you’re actually looking to learn something from Bill and Ted, you’ve missed the point – relax, spark up a doobie and enjoy the mayhem.

Previous: No horror for Moretz
Next: Hyper Japan: Adventure in Anime