I was quite impressed by Community. Ostensibly a standard zombie film set on a ‘sink estate’ somewhere near London, the film feels like one of those clever and well-made student productions that knows exactly what it is about. Part of this effect is achieved by centring the action on a pair of film students on a mission to capture some powerful footage of the notorious estate where the title’s folk are based. Hand-held camera footage of street corner interviews with residents of nearby places establish that there are a lot of ugly rumours doing the rounds about our chosen estate: the people there have become psychotic due to their very surroundings, says one interviewee; another has heard that a girl committed murder trying to escape the place. Everyone seems to agree that it’s bad news.

Cut to our heroes idealistic film students Isabelle and Will. We first meet them sitting on the bus on the way to their desperate destination. Isabelle, we learn, is all about social injustice these days, hence her desire to visit a place representative of social breakdown. “Hollywood is the greatest injustice of them all,” an statement unfortunately not expanded upon, could point to a concern about the biased filtering process that Hollywood conducts before faces and ideas reach the screen, or a selfish concern for recognition on the part of delightful Isabelle. We’ll pick the former, particularly as she elaborates on the injustices she perceives to be apparent on council estates – ‘poverty, drugs, crime – and all this right on your doorstep,’ she opines ‘well, not quite, it’s a lot futher out than I thought’ replies a sceptical but smitten Will, ‘no Will, it’s a lot nearer than you think’ she replies tartly and portentously. A flat and almost meaningless line perhaps, but we get the point. This film Has Things to Say About Society.

But it is also a kind of a zombie picture. I say kind of because the plot soon develops when the pair reach the council estate to inform us that what has actually caused the breakdown in the community is a particularly potent form of marijuana grown in the community centre (oh, the irony) by some sort of deranged transvestite called ‘Auntie’ who made the startling discovery that her weed would grow tenfold when cultivated with the aid of dead bodies. Animals or people will do. Sweetly, the whole community has rallied round to help dearest auntie in any way they can – the kids learn killing in stages: first rats, then dogs, then, well you can guess. On discovering all this, a fair bit of mayhem ensues, while the ironic social commentary is kept up with scenes such as the one where a stoned group of locals sing ‘Jerusalem’ while gently encouraging Isabelle to partake in their potent product with the aid of their lungs. Cut to shots of the tattered estate with an orchestral rendition of Blake’s ode to England. I enjoyed that. 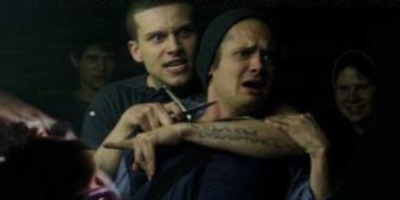 Frankly, in 74 minutes, Community managed to do a lot more with its material than a lot of films I’ve seen recently manage in 150. Self-conscious, playful, tense and quite exciting for its bizarreness, I’d recommend giving it a viewing if you fancy something short, unusual and strangely current. They should have called it something else though.