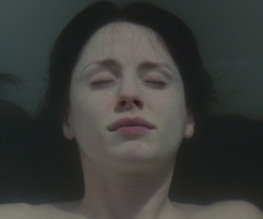 Polly (Fraser) is a student working in a cardiac research unit under the tutelage of creepy Julius Greengrass (Grant) when she starts to hear noises in her house. Unsure if they are coming from the flat below, her suspiciously absent boyfriend, rocker Chapman (Adam Fenton) or outgoing sister Jimi (Antonia Fraser) she begins to mentally break down.

The fact is that hearing noises, which in this case is usually muffled talking, does not make for very interesting viewing. Scenes that may or may not be hallucinations, such as Jimi sleeping with Chapman, are not outlandish enough to hold our attention. How about seeing a giant ant on the subway, a la Oldboy? Cuckoo is far too restrained and British for that, and wastes comedic actors Greig and Grant by giving us a po-faced view on mental illness that fails to capture the imagination.

The film is a curious mix of minimalist theatre – think Stanislavski or Beckett – crossed with Fifties film noir. There are endless shots of the winding staircase, so broken down it may as well have ivy trailing over the banisters. The house is always dark (apparently a research grant doesn’t extend to electricity), and we are treated to endless scenes of Laura Fraser staring blankly out into the abyss. Fraser’s most recent gig, on BBC lesbian drama Lip Service, was another piece that sounded quite good on the tin but turned out to be surprisingly boring, and she is similarly vacuous in Cuckoo, conveying the emptiness of depression, rather than psychosis. Grant is faintly ridiculous as Professor Greengrass, named like a Cluedo character and not showing range beyond one of the game’s plastic figures. Creepy to him seems to be wearing round glasses, over-emphasizing syllables and giving long winded explanations of the definition of a hallucination taken straight out of a scientific dictionary. Tamsin Greig pops up as a bespectacled colleague, peering over test tubes in a comforting, Tamsin Greig-like manner, but even she can’t rescue such writer/director Richard Bracewell’s limp script. On viewing the confusion that is Cuckoo, the resulting emotion is not of curiosity or puzzlement, but simple tedium.

Previous: The Fighter
Next: Michael Moore sues Weinsteins for $2.7M