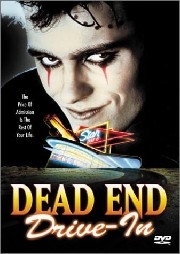 Set in an apocalyptic future, crime rates have risen dramatically, and the government’s solution to the escalating problem is to turn drive-ins into concentration camps for juvenile delinquents. When young couple Jimmy (Manning) and his girlfriend Carmen (McCurry) visit a drive-in… you can probably guess the rest. Unable to leave, Jimmy and Carmen must decide whether to stay and adjust to life within an electrical fence, or risk their lives and attempt to break free.

It’s easy to see why this is an “Oz-ploitation” cult classic, and probably the centre of many obscure little movie clubs around the world – the gratuitous female nudity for one thing; the edgy, new romantic clothing for another. Those familiar with classic Australian teen soap The Tribe will be able to see where the show got its inspiration. Cars litter the street in burnt-out shells, houses are decorated in neon shades and pierced, tattooed teens rob the bloody scenes of car accidents. Director Brian Trenchard-Smith’s world is jacked up on acid – and speed and hash too, like its inhabitants. However there’s a part of it that’s firmly retro: Jimmy’s ’56 Chevy; the greasy diners; the thickshakes; the girls banding together like punky Pink Ladies, talking about the pill as some sort of sexual revelation. 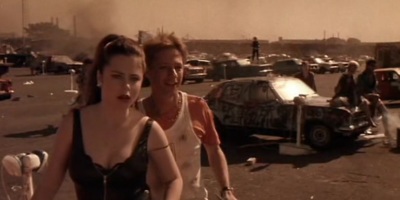 It doesn’t seem like a bad place to live, if only we were told why everyone was there. The reason for these wayward teenagers winding up trapped in a drive-in is never explicitly explained – Trenchard-Smith might be working on the assumption that the viewer would have read the blurb on the DVD before watching – all we know is that Carmen and Jimmy can’t leave. Neither can their friends, and for a time you want them to join Jimmy in making a break for it… ..until everyone turns into a massive racist. A truckload (literally) of Asian and Vietnamese people are brought into the drive-in, presumably for the same reasons why everybody else is there. Only these newcomers aren’t welcome, because they’re not white. When characters start saying things like “I don’t want some Asian raping me in the middle of the night” (Carmen), or “We don’t want these rice-gobblers here” (Dave, played by Dave Gibson) it makes you recoil going “What even? Where did that come from?”. The Asians aren’t the enemy, the reprehensible people walk among them. At the White Australians meeting (really), lanky psychopath Hazza (Wilde), who fantasises about Carmen’s “big eyeballs” for most of the film, declares “One of them could rape our women! It could happen tomorrow! Are you thinking about it? Because, by Godzilla, I know I am!”. Those present cheer in agreement, but we know better. Everyone stuck in the Star Drive-in blames foreigners for their problems, and believe that they are the reason their lives are dismal. Yet none of those complaining do anything to better themselves or their position. They take drugs and erupt into fights on a daily basis, and spend their downtime in a makeshift beach resort with a pool surrounded by car tyres. Jimmy questions them on why they stick to their lot and don’t attempt to escape, but the answer is always the same “There’s no point”. An extremely forward-thinking piece of social commentary, or a bizarre plot twist to make the attractive blonde hero even more likable? Both could be the answer, here.

Dead End Drive-In is Australian New Wave cinema at its finest, managing to be in equal parts laugh-out-loud funny (a character with a stammer is used to full comedic effect) and old-school creepy, as our boy Jimmy gets to know a world that slowly turns on him, getting more and more claustrophobic and hostile. Throw in an achingly cool 80s soundtrack that (almost) puts Drive in the corner, and you’ve got a ridiculous and entertaining cult hit that anyone who calls themselves a film-lover should see, or at least put somewhere where their friends can easily spot that they own it.