Tron: Legacy. His debut was nothing short of a roaring success, setting up his latest sci-fi adventure as a thing to behold. " /> 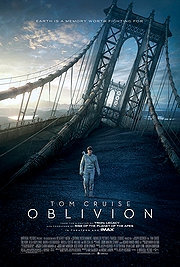 The year is 2070. Sixty years have passed since the Earth saw its moon destroyed. Without it the land was thrown into a chaos, ravaged by city-shattering earthquakes and tsunamis. When the invasion came, mankind reached for their last resort, the nukes winning them the war but losing them the planet. The race moved on to Titan (a moon of Saturn), leaving behind a skeletal mop up crew: former Marine commander Jack Harper (Cruise) stationed as a drone technician with only Vicca (Riseborough), his communications officer, as company. Living in a compound suspended miles above the earth, their mission is simple: maintain the drones and keep up the defences until the planet’s remaining resources can be extracted. For five years they’ve been an “effective team”, but two weeks before their return a spaceship crashes, bringing with it the woman Jack has been dreaming about for as long as he can remember. Her arrival sets him on the path of a mystery, the unravelling of which will change everything.

All hail the return of the great sci-fi! If you think back to some of your favorite science fiction flicks, the original Planet of the Apes, Blade Runner or even Minority Report, you’ll notice that they all have one very important thing in common: at their core they are a mystery. Yes, they are all set in a world of future imagination, but the crux of their story is reliant upon the solving of a puzzle, the unfolding of a secret, the discovering of a truth. And Oblivion is the next great addition to this grand tradition. Based on an unpublished graphic novel Kosinski wrote for Radical Comics, Oblivion takes a slow burn approach to story-telling. The first half an hour or so is solely devoted to the build up of this alien setting, the establishment of the cold but effective relationship of Jack and Vicca and the sinking in of the constant danger that Jack is surrounded by. We only ever know as much as Jack does which makes the revelation of any new bit of information a real discovery, drawing out our true understanding of the characters until the bitter end. The script throws together a number of the genre’s staples but it is done in such a way that they all fit together quite sensibly and satisfactorily in the long-run. There is nothing mind-alteringly innovative about the story but the film finds enough of its feet to keep you happily glued to your seat. 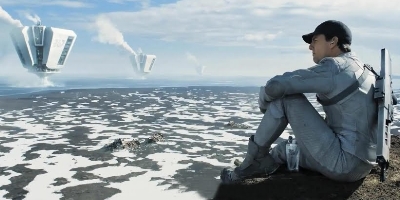 Whatever else might be said about him, Tom Cruise has all the credentials necessary to carry out an action movie. Here he slips easily into the role of a Marine, ensuring that every movement and gesture reflects those survival skills that have been honed through training and circumstance. But he is also convincing as a man that keenly feels the loss of his much loved home. There is a quiet delight to Jack when he is surrounded by natural, earthy beauty and there is an immediate understanding of the sadness involved in leaving it all behind. It is Andrea Riseborough that is the real stand-out, however, giving her cool and restrained Vicca moments of intense emotion that are so perfectly timed that they say more than words ever could. This is a woman that is caught between carrying out her mission, keeping the one she loves safe and desperately wanting to just go home. Riseborough allows each aspect to float to the surface with a subtlety that makes the personality intriguing and complex. The worst of the lot is Olga Kurylenko whose sole mission has been to look innocently pretty while being uselessly terrified. We’d like to talk about the ever awesome Morgan Freeman, but he has such little screen that his role as ‘mentor’ doesn’t really make too much of an impact. 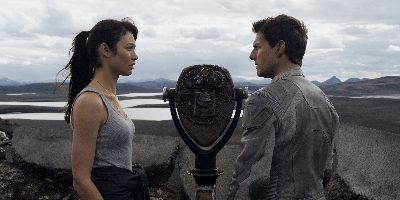 Even with just one success, certain expectations have been set for a Kosinski movie. Happily, his second release does not disappoint in this respect. It is the very scale of the visuals that will take your breath away. The expanses of light, bright sky will leave you feeling almost weightless, whilst the gritty world of an Earth after war, peppered with devastated U.S. landmarks (5 points for every one you spot), imbues you with a depressing sense of desolation. This is a land we know, one we’ve seen countless times before and here it looks nothing less than unrecognizable. Kosinski truly is an architect when it comes to building not just a physical setting but an emotional ambiance. Juxtaposing these barren, dead lands against ones of lush green growth forces the audience to take Jack’s loss on as their own. If you come out without having imagined, at least once, what it would be like to leave Earth behind, your heart is made of stone. 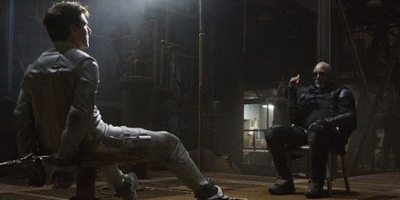 As a sci-fi movie Oblivion probably won’t give you anything you haven’t seen before. What it does do is weave all you are accustomed to into a great little mystery, one that is sure to keep you more than enthralled till the credits roll. The star-studded cast do their job but it is Kosinski’s reimagining of the world that will steal the show. Treat your eyes to this feast of vistas. Trust me, they’ll thank you later.