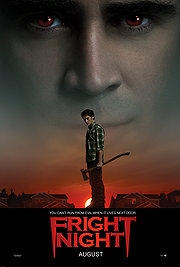 Average teenager Charley Brewster (Yelchin) and ex-best friend Ed (Mintz-Plasse) think vampires are pretty boss – that is until Charley discovers one in the form of his new next-door neighbour. The seemingly innocuous Jerry Dandrige (Farrell) is responsible for a string of recent disappearances in his town on the outskirts of Vegas, and – despite the plot of every horror flick before him – Charley can’t understand why no-one can see it except him. It’s left to Charley and his loyal girlfriend Amy (Imogen Poots) to recruit the rather conveniently placed Peter Vincent the Vampire Slayer (Tennant) to help him take Jerry down.

First things first: Colin Farrell gives a brilliant performance as Jerry The Vampire. It might have something to do with that crazy, Irish, ‘if you get to close too me I’m going to flip out’ gleam in his eye, but simmering insanity is a state that suits him well, and he manages to imbue every scene he’s in with just-restrained energy. Remember him in Daredevil? Yeah, kind of like that. There’s nothing like tempering devilish handsomeness with a look that says ‘I mustn’t eat you in public’. Thankfully, Farrell finds a worthy opponent in the ever-brilliant David Tennant: his vamp-punching Peter Vincent is a drunk, sex-obsessed leather-sporter with guy liner, a penchant for magic tricks and a questionable rash. He and Farrell riff off one another effortlessly, making the most of dialogue that is punchy, tongue-in-cheek and supremely silly. The lightness with which the original Fright Night concept is dealt with makes for fun viewing, and its modern take almost (almost) justifies the remake to begin with. Almost.

And, to be fair, it’s not just the grown-ups that deserve praise: Anton Yelchin and Christopher Mintz-Plasse hold their own throughout as scrappy teens Charley and Ed, with an easy chemistry that keeps you entertained in the gaps between the deeply enjoyable big set pieces. The two spend the running time caught between a desperate desire to achieve teen-cooldom and indulging in pure monster-geekery, with Ed’s delayed reaction to Charley’s accusation that he reads too much Twilight pure joy to witness. Employing a healthy mix of comedy and horror, Fright Night never takes itself too seriously, but still knows how to build up its tension for maximum effect – be its aim a punchline or a scare. Though it grabs any horror trope going, its sharp, witty dialogue ensures that it never quite lapses into cliche and keeps the audience on their toes throughout. It does suffer a little from lazy plotting; loose ends are left fluttering in the ubiquitously ominous breezes with police constantly stumped, family of the deceased uncaring and David Tennant’s leather trousers strangely hypnotising, but it just about gets away with it (seriously, so very hypnotising).

If you’re a fan of Farrell, Tennant, teen squeam, or you liked Jennifer’s Body (or, at least, would have liked it more if Megan Fox had pissed off), then this film is for you. Dark, silly, gory and well-played, it’s a respectable homage to the vampire original with added comedy bite.