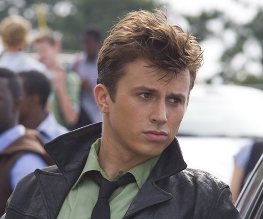 The bods behind the depressingly imminent Footloose remake have seen fit to grace us with another pointless trailer that tells us nothing that we don’t already know. The twist? This is the lame, po-faced first trailer’s sexier, eviller twin.

All that this really means is that there’s less clips of tortured, oppressed kids having a rubbish time not being allowed to do any dancing and more clips of sexy, bombastic kids bloody well doing some dancing, as well as seemingly endless shots of our hero (pfft) looking moody in cars/in the face of anyone vaguely authoritative/in the mouth of this one girl quite a lot.
So, instead of lamenting the film’s inevitable lack of good, take a moment instead to look up the cast and giggle at their funny names. Never mind that Kenny Wormald sounds like a Middle Earth refugee; bask in the splendour of Ser’Darius William Blain and Ziah Colon. This project has already redeemed itself.