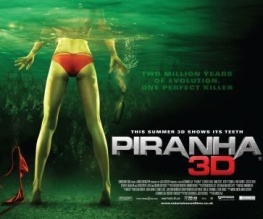 What with Mega Piranha, Mega Shark vs Giant Octopus and now Piranha 3D, I for one am a bit sick of self-consciously B-grade monster flicks – not to mention overuse of the word ‘mega’, which should have died along with Live and Kicking. I’m quite happy with a film which is spectacularly shit but thinks it’s quite good (see our Best Worst Monster Movies list for some of the funniest), but there’s no place in my heart for a production with nothing to offer but sarcasm. I expected Piranha 3D to be one of the latter films, or at the very best one of the former, which made watching it even more fun. Because it’s actually good. I know.

Picture the scene: you’re an American college student, and you’re looking forward to spending spring break on the shores of sunny Lake Victoria in a haze of cold beer and toned body parts. There’s a wet T-shirt competition scheduled for the afternoon, and even the local sheriff is improbably foxy. It all sounds ‘bitching’, until you and your compadres have your exquisitely formed and carefully tanned selves munched by a swarm of prehistoric fish. Whoops…

I know the film still sounds shit, but it genuinely isn’t. The action revolves around local boy Jake (McQueen), who’s missing out on Spring Break because he has to babysit his siblings (you don’t argue with your foxy sheriff mum). However, he naughtily ducks his babysitting duties to act as location scout for Joe Francis-alike pornographer Derrick (O’Connell) and ends up on a shiny boat with his crush Kelly (Szohr) and two pneumatic porn stars. One of these is played by the preposterous Kelly Brook, who hilariously thought that playing a camera ‘ho who strips naked for an underwater lesbian love fest would cement her reputation as a serious actress. Anyway, things get messy when a minor earthquake opens a fissure to a subterranean lake full of prehistoric piranha who have spent two million years eating each other – don’t you just hate it when that happens? – and they start to plough their way through the tender teenagers on offer like so many cocktail sausages. Sheriff Mom has to get everyone out of the water with as many limbs intact as possible, and then go rescue Jake et al from their boat. Which is sinking, natch.

The plot’s threadbare in places, but the ‘the piranhas emerge on the one weekend of the year which will justify excessive nudity’ conceit is the only truly implausible part. And amazingly, the cast isn’t bad either – Sheriff Mom (Shue) has come a long way from playing the crappy replacement Jennifer in Back to the Future II/III, O’Connell is superb as a relentlessly coked-up pornographer and a brief cameo from Christopher ‘Doc Brown’ Lloyd as the obligatory icthyologist is a joy to behold. Sharp-eyed viewers will notice homages to everything from Jaws to Titanic, and the film is nicely seeded throughout with a mix of deliciously low-rent jokes and absurd visual gags. A diver gasping “This is the longest shaft I’ve ever seen!” was met with a roar of “THAT’S WHAT SHE SAID!” from the audience, and you seriously haven’t lived until you’ve seen a thirty-foot 3D penis being severed, eaten and spat out by a disgruntled piranha.

It’s absurdly gory and unnecessarily boobtastic, but Piranha 3D is also thoroughly entertaining and makes excellent use of its 3D FX. It’s more exciting than the more hackneyed films in its genre, well written enough that the plot doesn’t solely rely on tits and teeth, and the last shot leaves you gagging for the sequel which is already in development. We can’t always watch highbrow films, and if you’re after a bit of rough then you could do a lot worse.

Previous: Angel-A
Next: Jennifer Aniston to get her raunch on