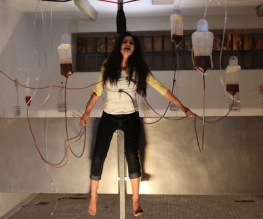 The Paranormal Incident follows the dangers that befall a group of Pepperdine University students who choose to investigate the mildly creepy, but mostly just dirty Odenbrook Sanatorium for a class project into the existence of paranormal activity. Why they couldn’t just watch the far superior Paranormal Activity and call it a day, we’ll never know, but then nothing makes sense about this film. From its opening with the hapless John (failed graduate of Acting #101 Oliver Rayon), bloodied and bruised in a hospital which appears to be somewhere in the vicinity of Crackden Alley and Whorehouse Lane, you are confused in the worst way possible.

All the usual suspects make up our ragtag group of boring coeds: oversexed jock and booby cheerleader (rest assured, not sufficiently booby to make this worth watching), two lovelorn nerds, a gung-ho blonde who is almost certainly the despotic captain of something like lacrosse, and a token black guy. Upon arrival at Odenbrook, through a nicely creepy thicket of brambles and hedges and other ghost hidey-holes, lead nerd John suddenly gets a call and has to leave. Right. Flashing back and forth between John’s interrogation by mysterious non-police “investigator” with no name, played by Amanda Barton, the plot doesn’t unfold so much as it incrementally falls open, like a Catholic schoolgirl’s legs over time.

Eventually, it becomes clear that someone, or something (make dramatic sound effect of your choice) is out to get them; things start to go bump in the night, corridors appear where there were once doors and The Dark Knight Rises badman Bane appears and starts talking through the pipes. Well, if it were Bane, this film would have got like three extra stars. Alas, it’s merely a whispery, gurgly-larynxed “ghost”, who proceeds on the usual series of torture and kidnapping and invasion of personal space.

So then they get drunk, and all of that leads to this: 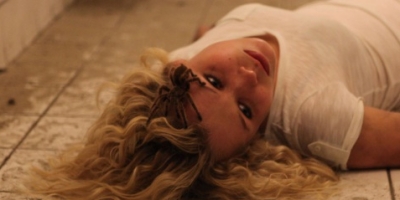 For teenagers wittering on about how ingenious they are, it’s unfunny idiocies like this that hobble The Paranormal Incident in its delivery. The cast are asked to follow a storyline with plot holes you could drive lorries through, and it’s difficult to imagine Helen Mirren delivering some of these lines without cringing, let alone baby actors like these. Thus, it’s not really their fault that you aren’t given any reason to give even half of a shit about any of them, and to add insult to injury, there’s not even some jammin’ tunes to help you ignore them.

The basic premise is overdone, but not intrinsically flawed; there’s a huge market in found-footage horror films, and done well, they’re fully competent additions to the horror-movie genre – see Cloverfield. However, with all the advances made in CGI technology, it has also become harder to make horror films convincingly scary; indeed, directors are finding it easier to make them pseudo-comedies with a heavy tinge of the metatheatrical, such as Drag Me To Hell and its demon-goat. If we felt like that was what The Paranormal Incident was aiming for, we’d be far more sympathetic – this, however, just makes us long for the budget to have gone to Scary Movie 5 instead.

Previous: Dr. Seuss' The Lorax
Next: Hitchcock's Vertigo named as greatest film ever!