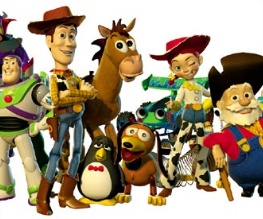 We’ll tell you a Story…

Well, where do we begin? In 1991 a small studio named Pixar – originally part of LucasArts – managed to grab a distribution deal with the all-mighty Disney, who demanded three computer generated films in return for their magic-dusting-distribution aid. There were complications, both creative and financial, and for a while it looked as though the partnership would never get off the ground. However, with the release of Toy Story in 1995, everything changed. The story of a group of living, breathing toys and their relationship with their owner Andy melted the hearts of kids, grown-ups and critics alike, and from then on Pixar hasn’t put a foot wrong, with Toy Story 2 opening in 1999 to equal acclaim, as well as having massive success with Finding Nemo, A Bug’s Life, The Incredibles, Bolt, stop us when you get bored…

For those who don’t know, (and thus probably spend winter wandering about with the ghost of Christmas past) Toy Story and Toy Story 2 centre on the adventures a group of toys owned by an ordinary boy named Andy. In Toy Story, led by cowboy doll Woody (voiced by a brilliant Tom Hanks) the toys live in harmony until a boisterous, high-tech Space Ranger toy – Buzz Lightyear (Tim Allen) – interrupts their precious hierarchy. Eaten up with jealousy at no longer being Andy’s favourite toy, Woody plots his revenge. Can he get rid of Buzz without revealing himself to be a villain? Toy Story 2 ups the excitement stakes; having Woody stolen by a fanatic collector – and introduces a whole host of wonderful new characters including Jessie the Cowgirl (Joan Cusack), Bullseye – his noble steed, and the evil Stinky Pete (Kelsey Grammar). Can Woody find his back way to Andy? And more importantly, with the prospect of an immortal life being appreciated forever, does he still want to?

Quite simply, a DVD collection without Toy Story 1 and 2 is like wearing a full dinner suit without any underpants. Sure it might seem fine for now, but trust me, in times of hardship you’ll need the support. Not only are these films utterly, utterly wonderful, but there is no doubt that with this franchise, Pixar re-wrote the formula for kids films everywhere. It’s a piece of history, people. And if the “pretending to have kids” thing falls apart at the check-out, we recommend you go with that.

On the blu-ray edition the extras are all well worth watching – fascinating featurerettes, interviews with animators, and of course, lots of comedy outtakes. Insights include a tale documenting how Toy Story 2 was almost entirely deleted because of a simple tech glich, and the only person who had a copy was an animator who worked from home. Phew!