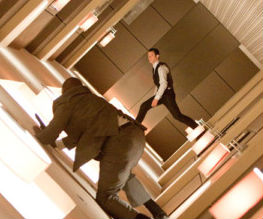 Unlike any psychological thriller before it, the film Inception has managed to generate a huge levels of anticipation despite very little actually being revealed about it. Like all the best Christmas gifts, Christopher Nolan has kept his Inception under wraps. So what kind of present has Nolan bestowed on his adoring public – is it the cinematic equivalent of receiving underwhelming itchy socks, or the latest iphone? The answer is neither, really. The joy of watching Inception comes not from finding out what’s underneath all its layers but rather in the actual unwrapping of them. And while not the perfectly formed piece of cinema many would have us believe it is, Inception is certainly an experience not to be missed.

The plot of Inception: Mapping the Maze

The story follows Dom Cobb (Leonardo DiCaprio) and his team of specialists, who work for hire extracting information from sleeping subjects by accessing their dreams. Enter Japanese business man Saito (Ken Wanatabe) who wants the team to do the opposite – plant an idea inside the head of an heir to a financial empire (Cillian Murphy) that would have huge ramifications for the financial world. Cobb must delve deeper than he has ever gone before into a subject’s subconscious, whilst also keeping the demons that plague his own psyche from jeopardising the whole operation.

The Beauty of Inception

The plot of Inception is beyond complex, but Christopher Nolan guides the viewer through his labyrinthine vision with ease, never leaving the audience feeling frustrated or without a compass. This is due in no small part to the lush cinematography, with each part of the dream within a dream within a dream structure made beautifully distinctive. Whether the setting is a snowy fortress or a Kubrickian hotel, Chris Nolan makes every single frame of the film aesthetically compelling, allowing the viewer to become totally engrossed at each and every stage.

While Inception will leave you slack jawed in wonder, Nolan never goes for cheap thrills. Every crumbling building and balletic fight scene in the movie is laden with significance and meaning, which the effects only serve to enhance. Nothing, no matter how outrageous, ever overshadows the film’s story, as Inception encourages the viewer not to look up in awe, but to look deeper in fascination. Never before has a blockbuster film been laced with such attention to detail. We see invisible raindrops falling into someone’s drink and whole streets defying gravity and it is to Nolan’s credit that he imbues such big and small details alike with similar relevance. Nothing feels like a set piece or a gimmick, as Inception encourages the audience to get lost in both the expression on a character’s face and the crumbling of a skyscraper. This movie demands your attention for the full 2 hours and 28 minutes of its running time and you will find yourself only too happy to give it. Which is just as well, for you will need to pay attention when it comes to deciphering the meaning of the Inception ending. Only you can decide.

Inception: The Heart of the Maze

While Inception keeps you gripped as it delves deeper into the maze of the subconscious, it ultimately feels empty at its core, unable to capture the audience’s heart as well as its mind. Despite excellent performances all round, the secondary characters feel purely functional in the service of Nolan’s Big Idea, it is hard to get emotionally invested in them. Instead, DiCaprio’s Cobb is meant to act as the emotional centre of the film, but Cobb’s fractured psyche feels like a faint echo of the emotional power that categorized DiCaprio’s performance in Shutter Island. Cobb’s emotional problems seem bland in comparison to the other dazzling aspects of the film, and the journey towards solving them feels far too easy. As such, Cobb’s problems are diverting as opposed to truly involving, and contribute to the feeling that Inception, though a beautiful film, may ultimately be a soulless experience.

Inception: Beyond the Dream

While the film may lack heart, the joy of Inception was never going to be an emotional one. We don’t enter a maze in the hopes of finding treasure at its centre, but rather to experience the satisfaction of solving it. Such is the pleasure of Inception, whose thought-provoking concept and intricate plot prove that Hollywood still has the ability to challenge its audience. While many mainstream films can make us feel, it is rare that one can so successfully and entertainingly ask us to think and for this Christopher Nolan, we salute you.