How I Spent My Summer Vacation

Disclaimer: This is a review of Mel Gibson’s latest movie, How I Spent My Summer Vacation. For reviews of Mel Gibson as a human being, I honestly don’t care enough to finish this sentence.

On the run from the law with a dead clown, a knackered car and a few million dollars, The Gringo (Gibson) crashes through the Mexican boarder and into the hands of a couple of corrupt cops. His money (previously the property of Peter Stormare’s formidable Frank) confiscated, The Gringo finds himself incarcerated in “El Pueblito”, an experimental Mexican prison that lets the inmates carry guns, use drugs and live with their families. His own concerns are put on hold, however, when he befriends a 10 year-old boy (Hernandez) and develops feelings for the waif’s mother (Dolores Heredia), both of whom are at the mercy of the prison’s self-appointed kingpin (Daniel Gimenez Cacho); a man planning on using the kid’s liver when his eventually succumbs. The film’s infuriating tendency to leave its central characters without names aside, there is a lot to like about How I Spent My Summer Vacation. While the trailer portrayed it as some horrendously flippant Mexploitation movie with sporadic bursts of violence, the feature itself is far less incongruent, first-time-director Adrian Grunberg’s familiarity with Gibson’s style no doubt helping in the process of bringing the star’s script to life. The jocular tone manages to balance the bloody violence and gritty visuals without ever threatening to derail the action, even if Gibson’s early voice-over work does border on the glib.

From his initial reaction to El Pueblito (“is this a prison or the world’s shittiest mall?”) to the easy banter he shares with the likeable Hernandez, Gibson is utterly at home with his one liners and witty repartee. If a little anachronistic, it’s nice to have Gibson back in action hero mode, particularly after the relatively staid Edge of Darkness and Jodie Foster’s sombre (but unfairly derided) The Beaver. While his story may lose its way as it tries to marry the prison-set coup with a personal vendetta against a high-flying baron (at one point he pretends to be Clint Eastwood in order to mastermind the convergence of two enemies, or something), Gibson’s performance is never less than compelling. If there is a problem with the movie, it is with the handling of the story itself. Whether an issue with the script or Grunberg’s direction, scenes often manage to impress on their own merits while rarely contributing much to the narrative as a whole: the film opens with Gibson and his partner wearing clown masks for the sake of a couple of gags, characters are introduced just so that they can be shot down during their next appearance, and the prison-set antagonism is put on hold so that Gibson can blow a hole in a skyscraper with a pair of random grenades. It doesn’t help that the cinematography keeps flashing between cinematic and televisual, accentuating the bleak beauty of one moment while making another seem like a deleted scene from the second season of Prison Break. So how did Mel Gibson spend his summer vacation? With a very mixed bag, it must be said. Solid performances and a jovial script give Grunberg’s film a strong personality, but the finished product is somewhat undermined by careless plotting and an over-abundance of pointless characters. As for that name: who knows what they were thinking. 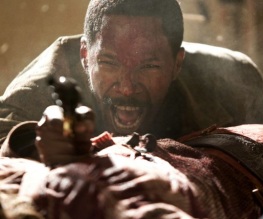